Hiyah Friend! There is less than a month to go before the seventh expansion of Hearthstone, aptly named Kobolds and Catacombs goes live. There has been a lot of cards released during the first and second weeks after it was unveiled during Blizzcon. Today, we will be sifting through some of these cards, which in my opinion will be very strong in this current meta based on the sets that are currently in rotation.

The Year of the Mammoth will have a Mammoth dose of gut-busting cards that will surely toss around the current meta. We might be seeing a resurgence of another archetype for Priest, just like what the Knights of the Frozen Throne did for Warlock. We might also see the comeback of the pesky Quest Rogue, which has been nerfed recently. So sit back, relax and read on. This will be some of the cards that will surely affect the meta when they get released. 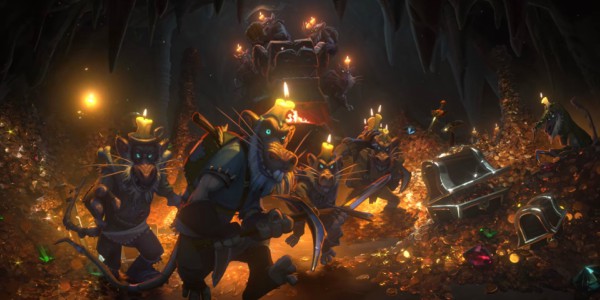 Just when we think that Priests has enough board clearing potential with the Anduin DK, Pint Sized Potion + Shadow Word Horror combo and Dragon Fire potion, we were clearly wrong. Looking at the card Duskbreaker is one of those minions that looks pretty alright cost wise. It has a nice 3/3 body for a 4 drop. But where Duskbreaker shines is when this is included in a Dragon Priest deck.

With the current Dragon cards, we have like Cobalt Scalebane and the Bone Drake, the release of Duskbreaker seems to be moving along to the resurgence of Dragon Priest. What makes this a very good card, however, is the Battlecry that it has. It becomes a board clear early on in the game if you are holding another Dragon in your hand. With a Dragon Priest deck, it would be very easy to utilize this Battlecry as you will have an abundance of them Dragons in your hand. Now, talk about frustrating your opponent. 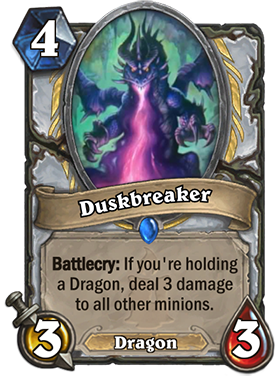 Yet another Priest card which also works as a board clear. Blizzard must be showing Anduin a lot of love by giving him the cards he so needs. Psychic Scream though is a double-edged sword. It does clear the board of minions, but it will not kill them. What this card does is it will shuffle all minions into your opponent’s deck. And yes, that includes your minions too.

This is like the Rogue card Vanish, but instead of putting it in their hands, they put it back in the pack. Just make sure you do not have any minions on your side of the board if you are using this to clear the board as you might be giving your opponent more resources if they manage to steal some of your minions when it gets shuffled back into their deck. 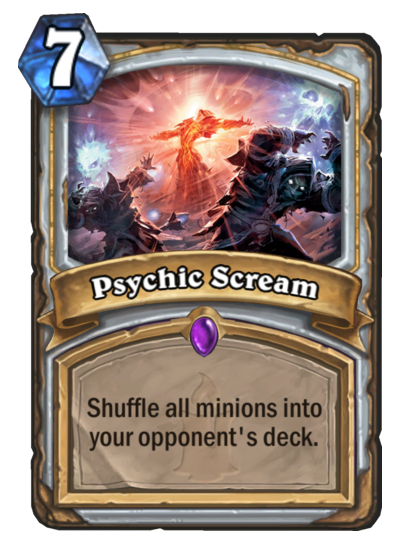 Remember the Legendary Deathwing? You know, that pesky 10 drops 12/12 minion which has a Battlecry of destroying all minions on the board and also discarding your hand? That, my friends, is a very good board clearing card if you ask me. However, you would be wary to craft it since it only fits in a few decks. Regardless of that, Warlocks do also need a board clear of their own. Something that does not damage their HP. Defile cannot be used by a lot of Zoolock packs as it has the 2 cost on it, which will work against Keleseth. Hellfire, although it clears the board early on, is not that helpful in the later stages of the game as it only does 3 damage.

Twisting Nether has a very high cost at 8 mana, and sometimes it is too late to be casting that if you are against an Aggro opponent. Well, fret not! Cataclysm will save the day. It does work like a mini Deathwing, without the body. It clears the whole board and discards your hand, which is it’s the only drawback. It is also set at 4 mana, so it can be used in the early stages of the game as well if your opponent is already controlling minions that cannot be removed by Hellfire. Having Cataclysm is the perfect card to remove those minions with health that is over 3. You will be able to easily get the cards back in your hand due to the hero power of the Warlock. 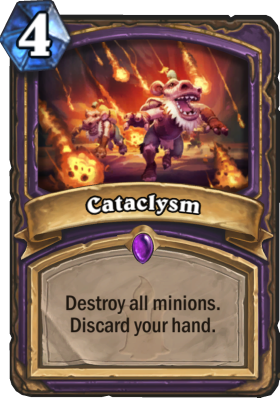 Sonya Shadowdancer is a pretty nifty minion with its ability. This ability will surely help Quest Rogues with completing the quest after it has been nerfed to 5. Sonya’s ability is that you get a 1/1 version of your minion that dies and it only costs 1. With Sonya on the battlefield, you can just easily suicide your minions by clearing your opponent’s minions and then just recasting them again as a 1/1 minion.

This will surely bump the counters fairly quickly and you might be able to complete your quest with 2 chargers in hand by turn 5 if you get lucky with your draws. This can also be utilized in Tempo Rogues, giving you 1 drop Vilespine Slayers, 1 drop Blaze Callers, 1 drop Bonemares or additional Swashburglars. Talk about being OP! 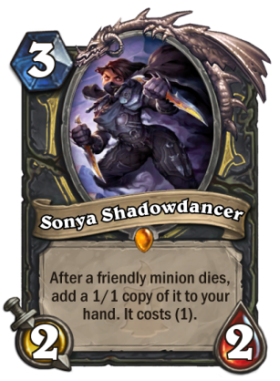 This is the other half of the cards needed for the resurgence of Quest Rogue. Zola’s Battlecry is to add a golden copy of a card you choose into your hand. I mean, who does not like Golden cards? They’re shiny, the artwork is animated, and they just look cool. Then again, for Quest Rogues, it will add another copy that you need to complete the quest quicker. And since Zola the Gorgon is a neutral card, it might also find its way into tempo decks that utilize Keleseth.

This will grant you an extra copy of Keleseth in your hand and further buff your minions in your deck. Gone will be the days where only Rogues can pull off double Keleseths. Now, we might be able to see Warriors and Warlocks do the same thing with Zola in the pack. This makes it a little bit cheesy though. Zola the Gorgon, GorgonZola? I see what you did there Blizzard! 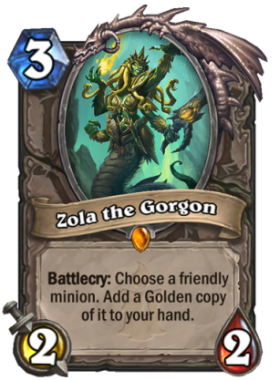 All hail the King!! At last! We have a card to piss off those pesky Highlander Priests. Why carry an Archbishop Benedictus if you can use King Togwaggle? The King, however, will be mostly utilized in meme decks. Assemble a trash deck and put King Toggwaggle in it, then swap packs with your opponent and get his face #rekt with his own deck. I see Disguised Toast utilizing this and making a meme pack out of it as he is a very good deckbuilder when it comes to memes. I’m sure the King Monkey is going to make a monkey out of their opponents if they are not able to pay the ransom to switch decks back. 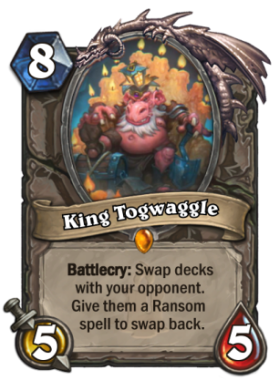 The last of the good cards that I will be reviewing. Arcane Tyrant is just a very good 5 drop that will fit in a lot of decks. This is due to the Tyrant’s ability, which makes it become a free card if you cast a spell that costs 5 or more. Talk about a free body after casting a board clear or a minion removal. This is like the bang for the buck combo package that will create a lot of tempo. I see the Freeze Mage or Exodia Mage utilize this when either using Blizzard or Cabalist’s Tome and even Firelands Portal. Jade Druids would be able to utilize this as well when using Spreading Plague, Nourish or Ultimate Infestation. Talk about getting a 4/4 and a 5/5 while getting 5 armor, drawing 5 cards and dealing 5 damage. That sounds broken to me! Priests would be able to use the Tyrant too with the usage of Dragonfire Potion or Holy Nova.

Miracle Rogues might make a comeback with Vanish or Sprint. This is also a good combo for Twisting Nether or Siphon Soul for the Warlocks. Even Paladins would be able to use the Tyrant with Spikeridged Steed, Lay on Hands and Dinosize. Shamans would have a use for it with Volcano or the new spell Lesser Sapphire Spellstone to trigger it. The only classes that might get shafted would be Warrior and Hunter, but even with Warriors with Brawl, it can be viable. The possibilities for this card is endless and sooner or later, people will be crying to nerf this one. 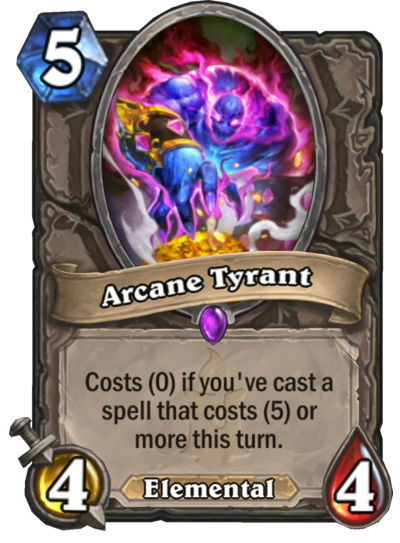 These will be the cards that will be making big waves in my opinion when Kobolds and Catacombs gets released. There are more of these reveals coming up in the next few weeks and I will be reviewing the next batches of them and see if they create a wombo combo with the current set we have right now and how they will affect the meta. So stay tuned and keep watching, as we will be doing another big reveal next week. Once again, this is Karmakeddon, and you guys always stay cheesy. Good luck!

In light of recent results to the Hearthstone European Spring Playoffs, we saw Hoej take a decisive 3-0 lead over well-known streamer, Kolento. Regardless, Kolento’s lineup was unfavored to his lists specifically targeting control archetypes, while Hoej brought full aggro sweeping the Ukrainian player. What surprises me the most is the decks that Hoej brought […]

Hello there card slingers! I have some mighty fine news for all of you. It involves a lot of exploration, creepy catacombs, treasures galore and a promise of a fun limitless adventure. Blizzard just announced the new expansion that is going to be coming for Hearthstone. It is going to be available in December. I […]