Hello fellow gamers! Continuing with our series of articles diving into the history of electronic sports, today we are going to talk about Intel Extreme Masters (and from now on we’ll simply call it IEM), a series of global eSport tournaments that have been held in multiple cities across the entire European continent (some other cities from other continents too, but they’re mostly in Europe).

The IEM series was founded in 2007 and is always organized by Electronic Sports League (also known as ESL, a German company). The main sponsor, as the name gives away, is Intel – and there are plenty other minor sponsors as well.

The main games played in IEM events are Starcraft 2, League of Legends, Counter Strike Global Offensive, Quake and Hearthstone. These are all games with big fanbases and worldwide popularity, on top of being known to be pretty competitive, some more than others (I’m looking at you, Hearthstone rng!).

So far, there have been 12 seasons in IEM’s history, with the last one having one of its stops just a few days ago in Oakland, a city in the state of California, USA. It was the last championship of 2017, and fans now wait eagerly for the release of the next competitive calendar schedule.

The series so far

Each Intel Extreme Masters season has a variety of tournaments, so over the course of the 12 previous series there were well over 50+ events across many games (mostly the ones we pointed out in the section above) and genres.

For this reason, instead of picking the most memorable events (like the previous eSports history articles we wrote), we’ll go over each competitive calendar one by one, listing the titles played, champions, prize pool and everything else one might find relevant.

The first finals took place in CeBIT (March of 2007), a very famous computer expo that is held every single year in Germany (ESL is from Germany, so it was easier for them to host it nearby).

The premiere series only had competitors in CS 1.6 and Warcraft 3 (the RTS title used to be very big back then). Pentagram (a polish squad) won the CS trophy and ToD, a French player, claimed the War3 top spot.

The second finals were also held in CeBIT (you’ll see that this trend continues until the year 2012 or so). After the success of the previous series, ESL expanded the reach of the tournaments are held the IEM Global Challenge in Los Angeles (which seeded to the finals).

The games played were still only CS and War3, and the finals champions were Mousesports (a German CS squad) and Lyn (a legendary RTS player from South Korea).

2009 is the year that IEM exploded and got really big. While the previous series had 1 global event and the world finals, this one had 8 competitions not even counting the finals (which were still being held at CeBIT). These events were: 4 Global Challenges (Games Convention, Dubai, Los Angeles and Montreal) and the continent championships (2 Asian’s, European and American).

IEM traveled the world, with tournaments being held in many big cities such as Los Angeles (United States), Montreal (Canada) and Dubai (United Arab Emirates).

One interesting fact about season III is that ESL added a new game to the competitions: World of Warcraft – the famous Blizzard MMORPG, and at the time the biggest game in the world with the largest playerbase. The mmorpg genre was never really one of the biggest in eSports, but it still has a few events even nowadays. 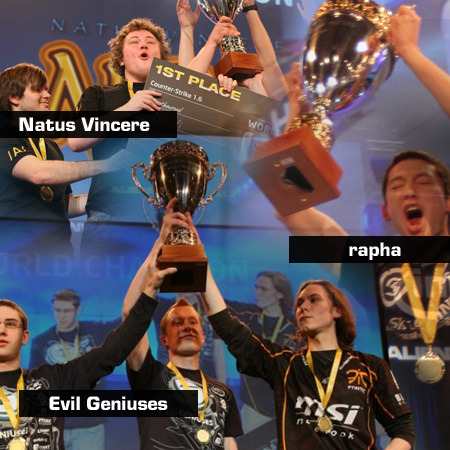 3 to 4 years after its creation, IEM kept amounting to more and more success with each new competitive year. The number of events remained pretty much the same from the previous year, and the tour visited some new cities, with Chengdu in China being the most notable one (and drawing lots of local attention, as the Chinese were absolutely crazy about Warcraft 3 and Dota).

Some new titles were also added. Defense of the Ancients (that’s how Dota was called back then) and Quake Live started being played competitively in a few tournaments (not all of them though) throughout the year.

2011 was another turning point for IEM, with the addition of Starcraft 2 and League of Legends competitions. Seeing as both games had the largest playerbases in eSports titles back then, it was a no brainer that they’d eventually get listed – and also a no brainer is the fact that they’d bring heaps of success to the organizers, drawing media attention and many more sponsors.

There were battles held in Cologne (Germany) and Shanghai (China), two cities never visited by IEM before.

One thing that stands out is that in Quake, the player rapha won back to back world championships (seasons IV and V) – He completely dominated the scene back then.

The competitive titles remained the same, but everything kept getting bigger (as the previous year trends). More sponsors, bigger prize pools, higher skill level showcased by the players.

Some new cities were a part in 2012: Guangzhou (China), São Paulo (Brazil) and Kiev (Ukraine). By now you can see how truly global IEM is, with big presence and impact across the entire world.

This was a transition period for ESL and their Intel Extreme Masters branch. CS wasn’t featured among their game list anymore, leaving only Starcaft 2 and League of Legends to carry the electronic sports flag.

The South Korean domination started presenting itself, with their LoL squads being the best in the world while their Sc2 players were also leagues above the competition from other countries.

Katowice (Poland) held one of the events, and another one was hosted at Singapore for the first time.

The eight IEM year had a very similar structure to the previous one. One of the only differences was the addition of Hearthstone as a competitive game in the world championships.

Another big difference is that the finals were no longer played in CeBIT – IEM had grown so big by the time that it ended up outgrowing the computer expo, needing its own venue (this year it was held in Katowice).

Shenzen, Toronto, Taipei, San Jose. 4 new cities that had never hosted one of the tournaments before got a chance in the ninth season. The South Korean domination continued in Starcraft 2 and around this time, League of Legends organizations were forced to withdraw from most 3rd party events by Riot Games (the producer and publisher of the MOBA title).

In fact, all teams who participated in Riot’s official league had to sooner or later give up on playing most of the events organized by ESL (or any other private companies). This means the best squads could no longer compete in IEM, resulting in a lack of viewership interest, culminating in this being one of the last year with LoL tournaments.

Without a big LoL presence, one of its biggest games in the past, many people thought IEM could go under and stop existing – but the series success wasn’t halted in any way. The 10th year saw the addition of CS GO (one of the most popular FPS of all time) along with Heroes of the Storm, Blizzard’s try to capture a piece of the MOBA market (they weren’t very successful at doing so but the game and its eSports scene is still alive to this day, albeit very small when compared to its competitors).

There were no new cities this time, but IEM continued to tour around the entire world, hosting tournaments in several continents throughout the year.

For the first time in history, ESL stepped foot in South Korea to run an event. It happened in Gyeonggi, a city with over 10 million in population. It’s no surprise to any that South Koreans took the first spot in the podium in all competitions: Starcraft 2, League of Legends and Overwatch (new game launched by Blizzard and being experimented in eSports by IEM).

The finals were held in Katowice for the 4th time in a row, Flash Wolves (LoL), Astralis (CS GO) and TY (Sc2) taking home the 1st prizes.

This one is still ongoing, with only 3 events having happened so far: Sydney (For the first time a city in Oceania hosts one), Shanghai and Oakland (first timer as well).

A new game has been added to the list of eSports: Player Unknown’s battlegrounds, today’s most played game on Steam, consistently showing numbers 3,5x bigger than Dota 2’s and close to 5x bigger than CS GO’s.

The world finals will be played in Katowice, as it has come to be expected, and will feature the best players in the world competing in Starcraft 2 and CS GO (PUBG still not included in the finals).

Thanks for joining us on this trip down eSports history, about one of the longest running tournament series and arguably the biggest events hosted by 3rd party companies. We hope you enjoyed it and stay tuned for more in the future!