Blizzard recently announced the upcoming Hearthstone patch which will include balance changes. The patch will affect 5 staple cards, 3 of them are Basic, 1 from the Classic collection and the last from the new expansion, Knights of the Frozen Throne.

This left the community outraged especially the pro players like Fibonacci as this will severely under power a lot of classes and it will ultimately affect and permanently change how a deck will be played. Today I will be reviewing what they are and discuss its pros and cons and how it will affect gameplay. 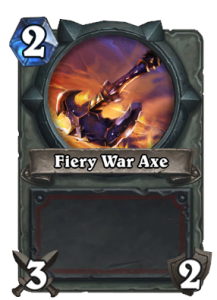 Fiery War Axe is a basic weapon and is Class exclusive only to Warriors. It is a 2 drop, meaning it needs 2 mana crystals to enter the play, and it has 3 attack and 2 durability. Overall, this was the bread and butter of the Warrior as the class heavily relies on weapons and is an auto include in all Warrior decks.

It shines its brightest when utilized in a Pirate deck as you can play this card on turn 2 and play Cultist on the next one if you have some pirate minions on the board which buffs the weapon’s durability and attack by 1. With that combo, you can remove a fairly large minion off the board or even deal a lot of face damage to your opponent. It can also be utilized in Tempo or Control decks as an early minion removal because of the 3 attack it offers.

When the patch is released, War Axe will become a 3 drop. It will become one of the most under powered weapon at the 3 drop range with Eaglehorn Bow and Rallying Blade in the same bracket. Rallying Blade and Eaglehorn Bow have their own effects which can still be comboed with other cards while nerfing War Axe severely ruin the tempo and your mana curve as there are better cards that can be utilized in the same category.

It also means that Warrior’s would have a dead turn in turn 2 as you would not have better options to play. It will severely affect how Warriors deal with the board at early stages since War Axe is a crucial card in board management early on in the game.

The better option for this is to lower the attack of the weapon or to make it only target minions rather than increasing its mana cost. For a class that emphasizes weapon usage, Blizzard dropped the ball on this one. 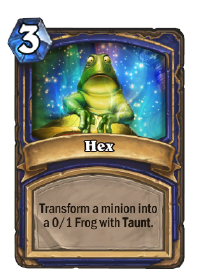 Hex is a Shaman exclusive spell that converts any minion into a 0/1 Frog with Taunt. This is the second of the three Basic cards receiving the nerf hammer implemented by Blizzard. This is a 3 drop and is mostly utilized by Tempo, MidRange or Control Shaman decks as this card rarely has a place in Aggro Token decks. It is mostly utilized by Control packs as this gives you a lot of removal power since you can target the biggest minion your opponent has.

When Patch 9.1 goes live, this will become a 4 drop card. Although it is an uncalled for nerf, it does not severely affect Control Shamans as they still have Lightning Bolt and also their multiple AoE removal spells like Lightning Storm, Maelstrom Portal and Devolve. What this nerf is doing, is just making the shaman rearrange their decks to fill in that mana curve slot by making them choose if they want to bring Jade Lightning or Hex.

In my opinion, increasing the mana cost of Hex is fine as it will also open a slot for the plethora of good options the Shaman has in their arsenal. It will also open new avenues for deck builders to experiment with newer packs as Hex will not be a deal breaker with Shaman having a lot of early removal. 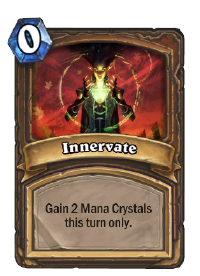 Innervate is a Druid spell that temporarily gives you 2 mana crystals. It is the last of the 3 Basic Cards that will receive the nerf. It is a 0 drop card and it is arguably one of the strongest free to cast spells in the game. Innervate is an auto pick in almost all of Druid decks, whatever archetype you are playing as this is mostly used to ramp up or get ahead on the board than your opponent.

There are numerous comboes that can be associated with Innervate. You can Innervate then Jade Blossom on turn 1, cast Swipe to clear the board on turn 2 or in most cases kill your opponent with the Living Mana the previous turn then Innervate + Savage Roar the next turn.

It will still be a 0 drop after it has been nerfed but the temporary mana crystals it will give has been reduced to 1. I actually do like this nerf as this will prevent a lot of people from abusing the Savage Roar combo. Besides, Druids still have spells like Jade Blossom and Wild Growth for mana generation, so Innervate being a free card is too overpowered if it gives out 2 crystals.

It will still be included in decks however as getting 1 crystal for free temporarily is still a good thing. It is also a good spell to cycle your pack with Auctioneer if you are playing Jade Druid. This nerf does not heavily affect Druids as it is still very strong with even just lower reward. 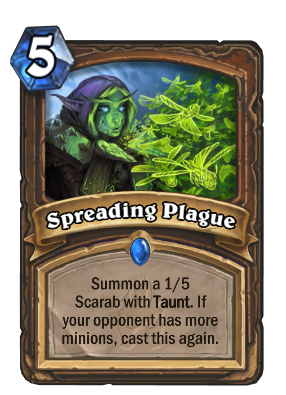 Spreading Plague is a Druid spell that came from the newest expansion. This is a 5 drop and what it does is it summons an amount Taunt minions depending on how many minions your opponent has. The tokens it creates are all 1/5 Scarab Beetles which are also Beasts. Control and Beast Druids utilize this card a lot and this usually buys you time against Aggro or MidRange archetypes.

Nerfing this spell is also not a deal breaker as it just increases the casting cost for it to 6. This is a situational tech card anyway as it is useless if your opponent has less than 3 minions and there are better options like Druid of the Claw or perhaps Swipe to buy you time and also clear your opponent’s minions. You can still combo this with Strongshell Scavenger but you need to wait until turn 10 instead of a turn earlier if want to play them together at the same time. 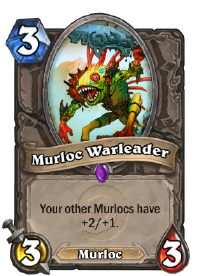 The Murloc Warleader is a neutral minion from the Classic set. It is a 3 drop minion, has 3 attack and health and its ability is to give all your other Murlocs +2/+1. This card can be used by all of the classes and is one of the core components of the Water Package that includes Finja the Flying Star and Bluegill Warrior.

Almost all of the attributes of the Warleader gets retained aside from the +1 health it gives out to other Murlocs. When the nerf happens, its ability will just provide attack to other Murloc minions. This can be taken as a good thing and a bad thing. It is a good thing if you are playing against a Murloc based deck like the Murlocadin since the 1 extra health makes it very hard to remove these minions in the early game. With a turn 2 Hydrologist, then a turn 3 Warleader, and 2 Rockpool Hunters on 4 buffing it, most of the people concede as it is very hard to kill any of the Murlocs on the board.

This also removes the board clear combo of Paladins as they usually do not suffer the Wild Pyromancer + Equality effect as Warleader keeps your other Murlocs to 2 health rather than dropping it to 1.

This is a bad thing if you are a Murlocadin player as this will most likely be another nail in the coffin for that deck type. With Vilefin Inquisitor rolling out of the picture and Anyfin an expansion before, this severely weakens the pack on so many levels.

Hope it was useful guys. See you next time.  Good luck!

Hello there card slingers! I have some mighty fine news for all of you. It involves a lot of exploration, creepy catacombs, treasures galore and a promise of a fun limitless adventure. Blizzard just announced the new expansion that is going to be coming for Hearthstone. It is going to be available in December. I […]