Real MoneyBitcoin
This review is on Skinup.gg, an upcoming betting website which is becoming increasingly popular with the CS:GO community. It is very sleek and well-designed; the black and green color scheme works really well. The menu on the left-hand side also clearly shows the games you can play here.

On mobile, the service appears in the same way, since there is no app, but everything still works fine and at the same speed. The deposit feature is also easy to use, you simply select your items and hit the deposit button. Of course, first, you need to sign in using your Steam credentials.

Once I had deposited I was able to use my points almost immediately. However, skins are the only deposit option, which could be a problem for anyone wishing to bet in bitcoin, skrill etc. Your deposited skins are converted to “coins,” the website’s currency which can be used to gamble. 1000 of these coins are worth $1 skin on the Steam market. 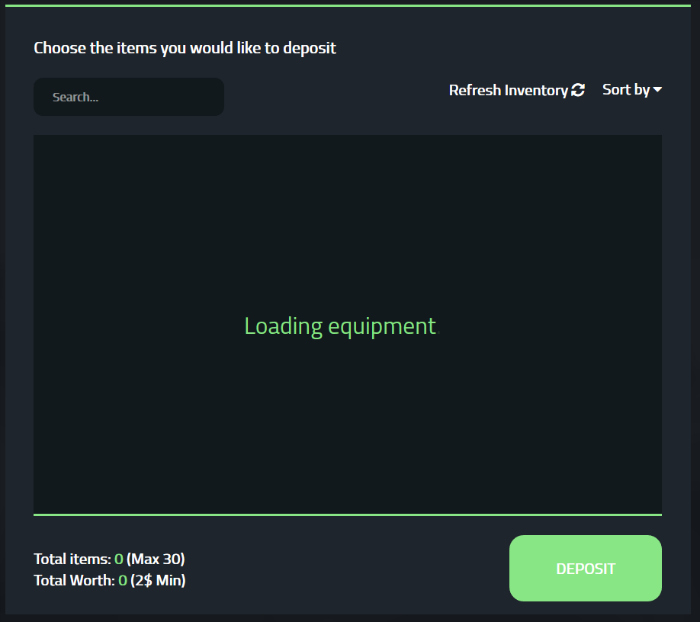 They can also be converted back to items and withdrawn at any time, as long as you have deposited at least $2.50 previously (when withdrawing items worth more than $5). You do this on the store page, which allows you to choose the skins you want to take back, as long as you have enough points for them.

Unlike many websites reviewed previously, Skinup.gg does not have an e-sports match betting option, which is a shame, especially since this would be fair and have the highest chance for profit if the odds were reasonable. However, they do have 3 different games to choose from.

The first of these is “Up”, which is very similar to the game on csgocrash.com. You bet your skins as a multiplier increases, and you can stop at any time, and win the multiplier that you withdrew on. However, a “crash” can happen at any time, and anyone who has not withdrawn loses the money.

They also have roulette and a “mines” game, which are more casino-style entertainments. The roulette replaces the traditional black, red and green with counter-terrorists, terrorists, and an “Up” logo. Their service also says that they are planning to introduce a dice game in the future, which would definitely cater to more people.

While there are no provably fair games, Skinup.gg is very popular, and at the time of writing this review, more than 500 people were online. However, if you are looking to bet large amounts, be careful since there seem to be almost no reviews online.

Even though Scamadvisor lists the owner, there is no information about him, and the name could easily be fake. It was also set up fairly recently, around June 2016. On the other hand, people also did seem to be winning a fair amount, for example out of the last 10 “Up” games, 5 finished on multipliers above x2.

Skinup.gg also offers a number of ways to earn free coins, the easiest one being adding their site to your nickname for 30 coins, with a bonus 100 coins for joining their official steam group. There is also the more traditional method of making coins through referrals. Also you can get extra 250 coins simply entering our code esportsninja into the given section.

Still, these bonuses are very small amounts of money if you are trying to make profit, especially compared to generous offers by similar websites such as fanobet, where referrals give you a lifetime 1% of their winnings.They also have an upcoming giveaway on their site for 3 M9 Doppler knives, which can be entered in many ways, for example by joining their steam group or by following them on Twitter.

However, the support for the service is very disappointing. This is no understatement since chat is only enabled when you have bet at least $25 of skins here. While this reduces spam, it means that a large number of customers are unable to chat. It is very hard to find out how to report a problem, and it took me a while to figure out that you have to click on the information icon near chat to find the link to their support page.

The site gives no idea of how long it takes for them to reply to tickets that are opened, and the FAQ answers less than 10 questions, meaning many questions are left unanswered, for example, whether they take any commissions from customers’ profits, or how much of a house edge there is.

Skinup.gg is by no means a bad site, and is visually appealing. However, only use this service if you are willing to compromise on help and support. The lack of knowledge about the owners does not have to be a bad thing, but make sure you are careful when using the platform.

Skinup.gg is not the best out there, but if ease of use and looks are the most important features for you, it is definitely worth trying it out!

May the odds be in your favor and good luck!

HellCase Review – One of the Best Case Opening Sites?

Opening cases is a fun thing to do in Counter Strike. Nothing is better than the thrill of the moment. However, it is a well known fact that buying Gaben’s boxes are the fastest way to lose your money. Thankfully, innovators came up with CS:GO case opening sites. On these services, you deposit money and […]

CS:GO roulette is a form of betting where people place money on different colors or symbols in hopes of earning a big profit. Those sections have different multipliers attached to them such as black and red being double multipliers. In between rounds, there is a waiting period where you place your bets for the next […]

Trading skins in Counter Strike is an age old pastime, ever since items were introduced by Valve. Traders look to make the profit by making small amounts of revenue on every deal. Regular players usually look to change up their skins every so often when they are trading. Items do get a bit boring after […]