Counter Strike is an extremely popular first person shooter that has appealed to PC users for years. As awesome as the game is, its history is cool too. From the unlikely beginning to controversial scandals throughout its evolution, there is a lot to cover. In this article, we will go over the rich past and present of Counter Strike esports, the shooter that changed the world for the better.

Every gamer knows about Half Life. This incredibly popular PC phenomenon really kick started video gaming, and user created mods were incredibly prominent. Some famous mods for half life include Dota, and Counter Strike. Officially abbreviated as CS, this game was first launched for windows in 1999, and quickly accumulated a cult like following. CS was especially popular because it required strategy and skill.

Unlike other shooters, you could be killed almost instantly. There were no respawns, and you can’t just spray bullets. You had to manage your economy, learn to use grenades, and learn strategy and spray patterns. This attracted many gamers, who loved the terrorism concept and were tired of the skill less first person shooters that dominated the PC gaming market up to this point.

Minh “Gooseman” Le and Jess “Cliffe” Cliffe were surprised at the game’s incredible popularity. When the creators of half life offered to buy the rights to their product, they sold it for a low amount of money. Although they regret this decision today, guys should be are happy that their brainchild was able to advance to such popularity.

Early in 2004, Turtle Rock Studios released Condition Zero. The version was fairly successful but was soon overshadowed by Counter Strike: Source. It was clean, smooth, and truly a marvel of accomplishment at the time. One of the most important things about CS:S was that it was connected to Valve’s source engine.

Before this, updates were a huge pain. You had to manually find a download link, download the huge file, and upload it manually. You couldn’t play multiplayer until a majority of people had finished installing the update, and the game was basically useless for the first two or three days after any updates.

This was greatly annoying to the players, and because of this, Counter Strike developers were afraid to push out vital updates. Source engine automatically installed any updates as soon as they were released, causing the game to run smoothly just hours after an update was pushed through. Because of this, CS:S was able to evolve from a chunky beginning to a smooth and developed esport backed by community feedback in just a few years.

Finally, in 2012, Valve released the much anticipated Global Offensive. This edition had advanced graphics, great gameplay, and had all the makings to challenge upstart shooters just as Call of Duty and Battlefield. CS:GO drew praise from critics everywhere, and it is the game we love and enjoy today.

CS:GO introduced many important features that we will touch on later, but one of the most important things we have to talk about is the matchmaking feature that seems common and obvious today. However, in previous versions of CS, players had to simply connect to community servers without knowing the skill level of their opponents. Matchmaking offered an organized and clean way for users to play a competitive and organized CS:GO with serious opponents of similar skill levels. This helped take Global Offensive from a good to a great esport.

Another feature that Valve implanted is Anti-Cheat, better known as VAC. This feature is often used jokingly in twitch chats during pro matches, but it really improves CS:GO. Despite all the criticism VAC takes, it does a good job preventing hackers. Combined with the Overwatch system, CS:GO has one of the best anti cheat systems out there.

Tournaments started being organized around 2013, and pro teams were being formed. Players were starting to make livings off of playing CS:GO, and competitions had ever increasing prize pools. Many third party sponsored tournaments such as Eleague and ESL Pro League have popped up with huge prize pools. Eleague was even broadcasted on primetime US television, and both leagues have broken the seven digit figure for prize pools.

In the start however, prize pools ranged from a few thousand dollars to many twenty to thirty thousand dollars for a big tournament. Teams who developed players for these early tourneys are now mainstays in the current pro scene. In addition to all these third party sponsored contests, Valve organized their own biannual tournaments called majors.

These are the pinnacles of CS:GO competition and are funded by both company and players themselves. Valve sells stickers of teams and pro-guys in game and most of the money collected goes to the crews themselves. This allows users to support their favorite pro-players on both their guns and with their wallet. The most successful teams in Major history include Fnatic with three titles and SK gaming with two back to back titles in 2016. 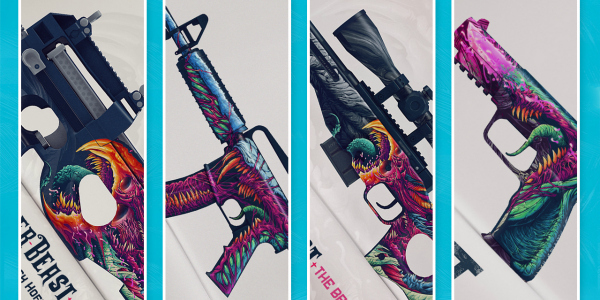 On August 14, 2013, Valve did something that secured CS:GO as one of the biggest games out there. They released something called skins in the arms deal update, which was met with skepticism at the start. However, no one is doing anything but praising this bold and brilliant move these days.

Skins started a whole economy based off CS:GO. Youtubers started popping up, pro teams just got more popular, scandals erupted, and CS just got more famous. Today, in-game items are valued more than PayPal by many in the cryptocurrency world. Think about that for a second. Pixels in a shooter are now worth more than the word of a multi billion dollar payment processor. The history of the non gameplay aspect of Counter Strike is rich, so let’s go over it!

First, let’s talk about the gambling sites that popped up because of the skins update. As items became more prominent and got defined values, people started realizing that they could market betting to young adults. Now no one wants to admit this, but it’s obvious that many under age teenagers use these sites. On these services, you can bet on pro matches and fun games with skins as a currency. Gambling is an extremely fun way to enjoy CS indirectly! However, it has caused many scandals over the years.

Youtubers have advertised services that they owned and rigged for themselves, which caused a general distrust of these sites for a while by the community. In addition to this, fake unboxings and content stealing were rife among youtubers, especially Skinfreak, an extremely controversial and popular content creator.

In addition to these problems, a huge class action against Valve lead to them contacting the major betting platforms and asking them to be shut down. In 2016, the sites compiled and Counter Strike’s future was in the balance. Luckily, the services soon reopened under new brands and with a disclaimer that prevented them from legal trouble. Today, gambling in CS:GO is a great way to enjoy the game indirectly.

From its unlikely beginning to modern day scandals, a mod created by two college kids has turned into something remarkable. Counter Strike esports has a cult following and is enjoyed by millions of users today. Its history is rich, and you all can witness the next chapter in the coming years! I would like to thank you for reading this article. I hope you enjoyed it, and be sure to lookout for future articles.

I will see you next time, bye for now! Good luck!

It looks clean and crisp. You will not get lost in navigating through this site. It was designed to be efficient and less time consuming to go through the items they are selling. DealSkins is a through and through scam platform. A lot of people won on this service but when it is time to […]

Skinup.gg Review – Is It Trustworthy Site to Gamble?

This review is on Skinup.gg, an upcoming betting website which is becoming increasingly popular with the CS:GO community. It is very sleek and well-designed; the black and green color scheme works really well. The menu on the left-hand side also clearly shows the games you can play here. On mobile, the service appears in the […]

The moment you enter GreenHunt.gg, all I can say is it’s simple and elegant. The interface is sleek and smooth. It is very easy to navigate in here, with the chatbox on the left, important links up top. The pages transition very well when clicking the links. No bugs, no hangups. All in all, it […]