Hello there card slingers! I have some mighty fine news for all of you. It involves a lot of exploration, creepy catacombs, treasures galore and a promise of a fun limitless adventure. Blizzard just announced the new expansion that is going to be coming for Hearthstone. It is going to be available in December. I hereby announce to you, the coming of Kobolds and Catacombs.

This expansion will put the spotlight on one of the more well known races in the Warcraft lore, which is the Kobolds. Legend has it that the Kobolds have been tunneling the bottom of Azeroth for millenias. So what does this new expansion give us? Stick around and we will find out! 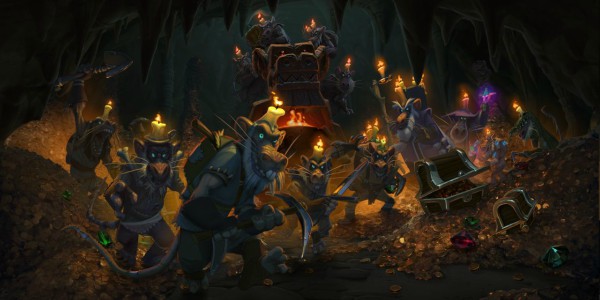 The set is going to come with 135 cards. It will also be introducing a new mechanic in the game, which is called Recruit. Aside from that mechanic, they will also be introducing new Legendary Weapons. Yes, you heard that right. There will be new weapons, and the Ashbringer will lose its pedestal as the only Legendary Weapon when this expansion releases.

With the new 135 cards, there will surely be some shiny toys that come with it and it will surely shake up the meta. Currently, there are already 14 cards that are unveiled during Blizzcon and more will be coming until the expansion releases. The 14 cards that were unveiled were 6 minions, which two of them are Legendaries. 2 Legendary Weapons, the 3 mana Dragon Soul for the Priest and the 6 mana Aluneth for the Mage. Along with them are the 6 spells for various classes.

Now, we are going to put the spotlight on the Legendary Weapons, and see what sets them apart from Tirion Fordring’s mighty Ashbringer. The 3 drop Dragon Soul is a weapon for the Priest class. I bet this will be an auto include in the current Highlander Priest as its ability will really provide a lot of board swing for the Priest. The stated ability is “Summon a 5/5 Dragon after you cast 3 spells in a turn”.

With Lyra the Sunshard on the board, you will be able to generate an abundance of these spells to last you the for the long haul. Combine that with the cheap cost of spells due to Radiant Elemental, the burst that you can get from the hero power of the DK Anduin, if the hero power burst doesn’t kill you, the summoned Dragons will open a can of whoop ass by the next turn. The concede button is at the bottom right, buddy!

The Aluneth is a very scary card. Even with the expensive cost of 6 drops, it will still pay off given its ability. Think of it as a permanent Arcane Intellect. The ability states that you will draw 3 cards at the end of your turn. See what I mean by Arcane Intellect? Now, you know why it’s scary? It will give the Mage a lot of options to play on their next turn by giving them a free card draw source.

This card will shine it’s best on the Exodia Mage build. It will let them get all the necessary combo cards faster by drawing the deck out much faster. You just need to be careful not to overdraw and burn the combo pieces. It’s as if the Exodia Mage is not scary enough, giving them the Aluneth is like giving them a shovel, so they could dig the grave of whoever they are playing against.

With the new weapons coming out, we will see the inclusion of Harrison Jones back in the decks. Most of these new Legendary weapons have 0 attack and 3 durability, which makes them stick on the board most of the times since you never attack with them. Harrison Jones is the best card to remove these weapons since it will have 3 durability, which makes you draw 3 cards from your deck when you destroy the weapons.

Acidic Swamp Ooze and Gluttunous Ooze are good substitutes to Harrison Jones as they are cheaper options, the former being a Basic card which you can get for free and the latter an Epic card which lets you gain armor depending on the attack of the destroyed weapon. Harrison Jones, however, is the better bang for the buck as it is a 5 drop, with weapon destroying and card drawing abilities and a solid 5/4 body. And of course, since you are destroying a Legendary Weapon, Harrison Jones’ line makes it much more fitting as “It belongs to a museum”. Really!

Aside from that, everybody is going to be getting a new Legendary card on November 6th. Marin the Fox will be a freebie which can be obtained by all players, just by logging in their accounts starting November 6th. If you bought the Blizzcon virtual ticket however or attended the Blizzcon event physically, you will get the golden Version of Marin the Fox. It looks better when it’s shiny ya know. It also has a cool ability. It summons a 0/8 Treasure Chest for your opponent. Presumably, it is a Taunt minion, and if you destroy that minion, you get a shiny prize.

Marin the Fox comes in at 8 drops, with a 6/6 body. Not a bad trade off. Just be careful that you destroy the Treasure Box, and not your opponent. Not only that, you will be getting one of the Legendary Weapons when the expansion gets released in December. It will be one of the 9 weapons and it will be random, just like what they did when they gave out the Death Knights during the Frozen Throne expansion.

Now, for the Recruit mechanic. This mechanic works just like the Y’shaarj, Rage Unbound Legendary. What it basically does is, it pulls a minion from your deck and places it on the battlefield. This is like your summon 1 get 1 free promo whenever you summon a minion or a spell with the Recruit ability. There are some Recruit conditions that only let you recruit a minion with a cost of 4 or less. Just hope that RNG is on your side and it does not draw Prince Keleseth and puts it on the battlefield, only to be destroyed by your opponent right away. Ouch!

This new expansion will also feature a replayable adventure, where you can gain more cards whenever you defeat bosses. This works like a standard adventure just like the others before but the finer details haven’t been ironed out yet by Blizzard. I will be back next week when they unveil a new set of cards and talk about how these shiny toys get included in the current meta. By then we might be able to build a new deck, either for competitive or ladder, or just a fun deck.

Till then, I bid you all good luck. Cheers!

Blizzard recently announced the upcoming Hearthstone patch which will include balance changes. The patch will affect 5 staple cards, 3 of them are Basic, 1 from the Classic collection and the last from the new expansion, Knights of the Frozen Throne. This left the community outraged especially the pro players like Fibonacci as this will […]