Wildcase is one of the few sites who break away from the mold. They are pretty unique in a way since they do not follow the traditional layout designs of very dark backgrounds and strikingly colorful boxes. They have a lighter background color using navy blue. The cases themselves were uniquely designed, giving them a style that looks like animals. This provides contrast to the lighter background and they use lighter colors which are pleasing to the eye. You would be able to play here for long hours without straining your eyes.

It is also very easy to use as they take the minimalistic approach in the layout. The names on the boxes change color whenever you hover your mouse over them. The text on the site is also fairly legible with easy to understand font.

Wildcase has the reputation of one of the more widely known services since its inception. They have sponsored really well-known YouTubers like Moe, Bucks and Anomaly to name a few. They are also one of the well-known sites in the unboxing scene. They offered lots of new features, more midrange cases to win off of, and at one point, a very lively community with the online count not going below 2000 users.

With that said, there is the good side and the bad side. There have been reports that the site has problems when the withdrawal gets buggy. They also removed the daily faucet as it was hacked recently by someone, and that shows platform’s vulnerability. Their swap feature is also not so nice because instead of crediting your account with the remaining difference from swapping to a lower priced skin, they instead force you to make losses. That is one of the things that people complained about.

The redeeming factor for them is that they have an awesome team of support staff who are always happy to help out if these problems arise. They are also active on their social media accounts, and mods are active in the chat box too so that makes up for the problems that they are currently facing.

There were many good features at the time of the launch but currently, only a few of them remain. What is still there is the affiliate codes, the odds display for the drop list, the price and quality display for the skins and the level up the rewards system.

They do offer a unique game which is only more commonly associated with online casinos. That game is called Crash. The way how Crash works is pretty much the same with the casinos, but instead of cash or bitcoins being the bet, you will be playing stakes with your items. This is a hit and miss though because if you happen to guess incorrectly, you can end up with either a lower priced skin or nothing at all. The best thing about this is that there could be a potentially high payout if done right.

They have a feature that is a little bit undesirable, however. For most people, the Swap feature is always a nice addition. They, however, took the Swap feature the wrong way, forcing you to make some losses if you decide to downgrade to a lower priced item since they do not refund the difference to your balance.

The odds are displayed on the droplist. The odds always favor the house on higher priced items. If you want to have a chance of winning good skins, however, the best ones to open are the custom cases created by other users since some of those boxes are specifically created to have a higher chance of winning knives or good weapons.

The platform already has the backbone for an exciting rewards and bonuses system but sadly that one is buggy and broken right now. They removed the daily faucet recently due to hacks. The level up system is built to complement their faucet but since that was taken out, the levels do not serve any purpose right now. Wildcase also does not offer any giveaway bonuses. Use the code CSNINJA to get $0.50 for free so you can try out opening a case here. 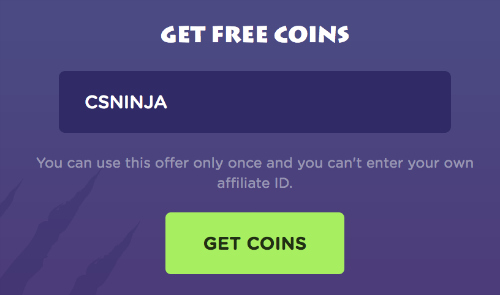 The deposit method is tuned to those of other unboxing services. They accept G2A Pay for cash deposits and direct Steam trades for item deposit. The good thing about their skin deposit is that they accept very cheap stuff that other CS:GO opening platforms would not accept. The bad thing, however, is that their deposit and withdrawal threshold is set at $5.00 which is a little bit stiff compared to other competitors.

Wildcase has one of the most responsive customer service representatives. They are very active in the chat, social media accounts and their ticket system which is powered by Zendesk. Although they have a great customer service team, what needed to be really fixed is their features so that the tickets and inquiries would be lesser.

They have a mobile website but it shares the same problems with their web counterpart. It is actually a shame since the mobile design looks flawless and in my opinion, it is very good. If they manage to fix the crashes and the laggy interface, surfing using the hand held devices would be way easier than doing it the traditional way.

The problems that this service is suffering from resulted in a loss of a lot of gamblers who will be playing on the platform. It is a shame really since Wildcase is one of the few sites that is designed properly with very nice features if they are working. The visual look they offer is the one that I actually prefer when looking for an unboxing service since you could play longer here because it does not strain your eyes. It is also easier to make a profit here with their mid range cases where they offer competitively priced rewards.

If all these problems are fixed, I am sure that we will be seeing a resurgence back into Wildcase since it is a very good place to play. I also hope that they rework the Swap feature to refund the difference to your account, that way their players do not feel cheated when using this service. They have a very helpful staff and let us just hope that the design team works out all the problems with the interface and make a turnaround.

CSGOCasino.net Review – You Need to Be Careful Here!

The design of the CSGOCasino looks straightforward. Once you enter the website, it automatically directs you to the Roulette page where people bet with their tokens. There are no ads that pop up on the sides, nor ad pop up pages. It is easy to navigate with the sections labeled properly and in big lettering. […]

In this review, we will take a closer look at the popular trading service by the name of Trade-skins.com which enables its users to trade their CSGO skins with fully automated bots for a small fee. It has a great reputation and there is really no way they can scam you since all trade offers […]

Counter Strike: Global Offensive it’s one of the most popular games played on Steam. Not only because it’s easy to play or its high skill level on competitive gameplay. CS:GO is also popular for its weapons and their resemblance to their life counterpart. In Counter Strike you can customize your arsenal of guns with skins […]