Real MoneyBitcoin
Drakewing.com is Drakemoon’s third site and consists of roulette, crash, jackpot and a spinmachine. Starting at the front page you will quickly see that the platform is built upon the Star Wars franchise. This includes the names of the different game modes, the layout itself and specific sound-effects.

At first sight, everything seems quite chaotic and noisy. Simply turn off effects and sound in the upper right corner and it will all feel a lot smoother. Trust me, if you are using the website for multiple hours your ears would be thankful for turning off the music and for people with slow computers – turning off the effects will often help make the experience better as many have reported lags and fps drops.

Drakewing’s credit-system is based on stars and 1000 stars equal to 1 dollar in skins. You can spend your hard-earned stars in the shop, which has a ton of popular items varying in price from just 8 dollars all the way up to a thousand dollars – sometimes even more. One thing worth mentioning is, like many other CS:GO gambling services, this one has a strong policy against skin trading and therefore you have to bet the amount you wish to withdraw. In reality, this means that if I deposit 100.000 stars worth of skins, for every single star I bet, one more of my remaining credits will become eligible for withdrawal.

3 very important features are “History”, “Provably fair” and “Support” you will find those in the bottom of your screen. History very simply shows your past bets. Provably fair is the players’ guarantee for not getting scammed, it’s a complicated equation that can confirm every single roll, crash, jackpot etc. of yours.

The support is a little more controversial. The Company behind Drakewing, Drakemoon, is very well-known for having an insanely bad support often not responding or simply just spamming robot messages. Here it is stated that every message to the support will be answered within 12 hours, this far I have not been able to prove them wrong but I have noticed a certain pattern in the messages looking like parts of the answer are simple Copy+Paste.

Drakewing has four game modes, drakespin being by far the most popular one. Drakespin is a very basic CS:GO roulette game with the colours white and black giving back your money times 2 and the green, referred on the site as “Yoda, the One and Only”, giving back your bet x14. Drakespin has 2 layouts “classic mode” and “normal mode” the only difference is the animation of the roll. In “classic mode” it’s a wheel spinning around and normal mode is… well it’s normal, just like every other roulette service.

Starcrash is the second mode and just like any other crashsite, no explanation really needed. Compared to other services I haven’t seen as many high crashes here and personally, I would recommend you to stay away from Starcrash. A little tip to new users, turn off sound before playing Starcrash: when the round crashes a very annoying and extremely loud metallic sound will give you the jumpscare of your life.

The 3rd service is Starslots and probably the least played of them all, for a reason. The game is like a classic 777-spinmachine and the payouts are quite poor, you have to be insanely lucky to actually win something. The game consists of 10 different planets, all with different multipliers when getting similar of the same kind in one line.

Most attempts to make money on Starslots will be huge failures and it is very VERY rare to get just a decent multiplier of your bet.

The 4th and last of the modes is the Drakepot. Drakepot is a completely normal CS:GO jackpot with the players competing against each other to win the grand price. Worth mentioning is the house edge on this gamemode, Drakewing takes a certain percentage of each jackpot.

Drakemoon has a bad reputation for scamming their users through missing payouts of won prizes and has been known for never letting people withdraw skins, forcing them to sell them back and play around with the money until it happens…They lose it all.

Though Drakemoon has some problems this has no truth to Drakewing. Since the service has a shop from where you can buy the desired skin of yours, there is no “missing skin” and the items shown in the shop will always be withdrawable. A lot of shady stuff has been going on with big sister Drakemoon but so far there has been no reports of Drakewing scamming its users though it is important to be aware of the controversy the company behind has been accused of.

Under the tab “Gift code” new users can redeem the code ESPORTSNINJA and grab themselves a thousand stars free of charge. In order to withdraw your free stars, one deposit is required and the minimum deposit is 8 dollars. 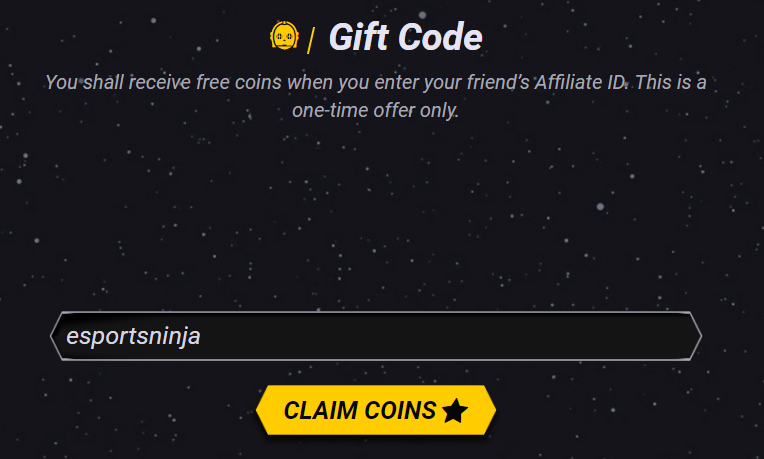 This platform is built upon a very nice and smooth layout, as long as you turn off effects. Following in the footsteps of Drakemoon’ Pokemon theme, they chose Star Wars and it is looking pretty solid, though it feels a little meaningless.

The shop is always filled with skins of all prices. Unlike other sites Drakewing has a variety of CS:GO gambling services and it is very nice to have the possibility of switching them up from time to time.

If you feel like being social while gambling it can be a little sad to find out that you need a total amount of 200 dollars betted in order to unlock the chat. Even though I haven’t received reports of frauds, it is always important to remember that the company behind Drakewing has been involved in a lot of shady stuff.

My recommendation would be to deposit a few dollars, play around with them, have some fun and withdraw whatever you are left with.

I feel like there are other sites offering the same services just with a better reputation and a little smoother layout.

Thank you for reading this article and sticking around till the end. See you next time! Good luck!

The design can be described as a full-on assault on the visuals. The color purple pops up the moment the page loads. There are stunning visuals that can be seen to promote the cases that they are selling. Design-wise though, it is very easy to navigate. The boxes are labeled with interesting descriptions, the graphics […]

Wildcase is one of the few sites who break away from the mold. They are pretty unique in a way since they do not follow the traditional layout designs of very dark backgrounds and strikingly colorful boxes. They have a lighter background color using navy blue. The cases themselves were uniquely designed, giving them a […]