Hi there Starcraft 2 fans! With Blizzcon over and 2017’s competitive season coming to an end, the community patiently (actually, impatiently would be a better word!) wait for Blizzard to release the next year’s calendar with information regarding the tournaments and events that will be part of the eSports season.

As you may have heard, Starcraft 2 is going to become free to play on November 14th. Anyone who wants to play just has to download the client (and make a battle.net account) and log in! The first campaign and some co-op mode heroes will be available for free to everyone, while the rest is locked behind small microtransactions.

The multiplayer part of the game (frankly, this is the one that interests us the most as eSports fanatics) will also be free, but in order to unlock it the user will be required to win a minimum of 10 games vs the AI (in any difficulty) over a span of 10 days – this requirement was put in place by Blizzard to avoid a sudden increase of smurfs (experienced players creating multiple accounts to stomp lower level opponents) and cheaters (since the game is free, getting banned has no real downside except losing achievements and past rankings and medals).

Because of this new influx of players coming to join us at the best RTS title out in the market currently (and one of the most exciting eSports to watch), the focus of this article will be on the Starcraft 2 World Championship Series (WCS from now on) – we will explain how the competitive season works throughout the entire year and provide you with every little bit of information you need to know about the system. We’ll go over the format used in 2017, because it’s highly likely that Blizzard just maintains the same structure for the upcoming years. 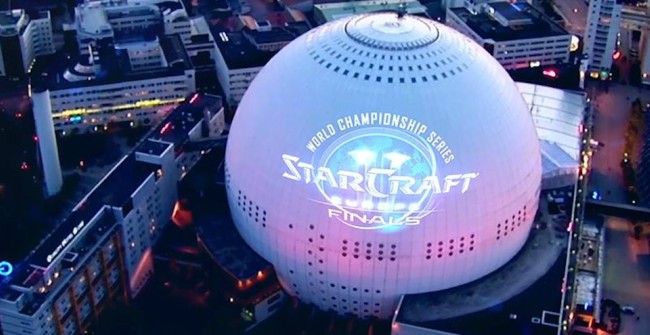 What is the WCS?

The WCS is a series of tournaments that happen throughout the competitive calendar (usually February to November). These events are organized by Blizzard and its partners, namely AfreecaTV, ESL and Dreamhack. For the past 2 years (2016 and 2017) the total prize pool for all the competitions was 2 million US dollars – this figure is expected to remain the same or increase a little for 2018.

WCS is divided into 2 categories: Circuit and Korea. Each category has their own exclusive competitions, which means players competing in different divisions don’t face against each other during the year, except during WCS Global Events (there are 2 or 3 per year and they unite all the best players in the world regardless of their division) and the Global Playoffs, also known as Blizzcon, the biggest tournament of the year. 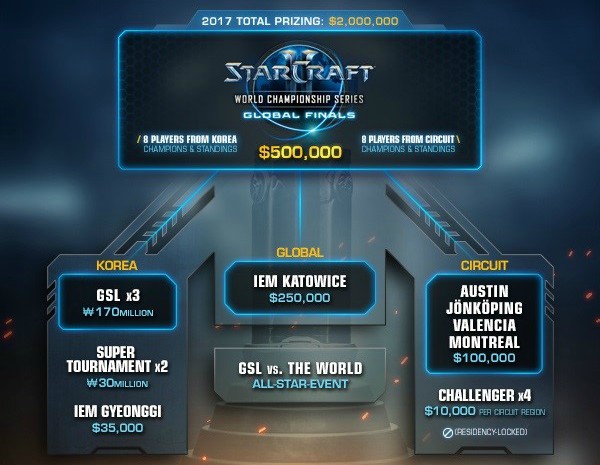 Every WCS branded event awards guys with ranking points during the course of the season, and the best ranking players at the end of the year are invited to compete in the WCS Global Finals – The invites go out to the top 5 seeded guys in Korea and top 4 seeded in Circuit.

This accounts for 9 spots in Blizzcon already – the other 7 slots (WCS Finals is a 16-player tournament) are reserved for the champions of certain events, established at the start of the season (we’ll touch this again on the next few sections in the article).

Since $500.000 of the 2 million prize pool is allocated to the Global Finals, the competition to get there is extremely fierce – in order to qualify, the professional players have to either excel at one major event and win it or perform consistently near the top tier for the entire year to rack up enough points to make the cut. 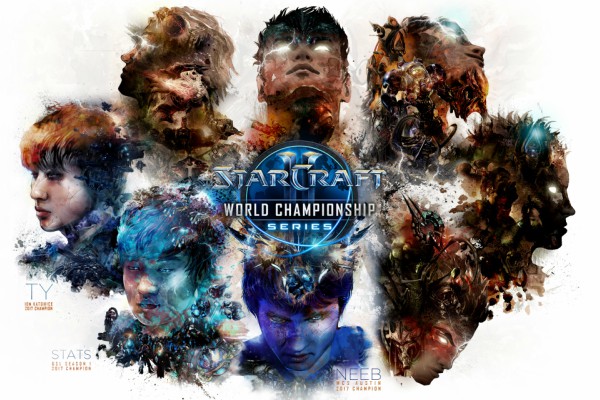 Undoubtedly the best region in Starcraft 2, South Korea has its own set of major tournaments during the season, where the best players battle it out for a chance to make it into Blizzcon.

Korea has 2 event franchises, GSL and SSL. Let’s talk about them for a bit:

The Global Starcraft League (that isn’t so Global anymore) is hosted by AfreecaTV, and it’s also the most prestigious tournament in SC2’s history. In GSL events is where most of the legends of the game were born – such as Nestea, MVP, MarineKing, Life, MC.

There are 3 GSL seasons during the competitive year, each of them awarding a big sum of money alongside lots of WCS ranking points – and also giving the 3 champions a direct invite into Blizzcon at the end of the year.

Starcraft 2 StarLeague is the 2nd South Korea event franchise. Albeit not as prestigious as GSL, it is just as extremely competitive. The organization is taken care of by SPOTV Games.

There are 2 SSL seasons during the year, and they reward players with money and points, but they have no direct invites to the Global Finals.

Circuit is the home for the rest of the players – In Starcraft 2, anyone who isn’t South Korean is considered a foreigner, that goes to show how big and dominant their region is. We have players from all around the world competing, from countries such as Brazil, Mexico, Poland, Canada, France, Germany, Sweden, United States, Taiwan and much more.

There are 4 WCS Circuits events throughout the year, usually one every couple of months. In 2017, they were held in Austin, Jonkoping, Valencia, and Montreal. The Circuit competitions are organized by Dreamhack (with the help of Blizzard) and the champion of each one is also rewarded with a spot in Blizzcon at the end of the season.

In 2017, there were 3 contests that united the entire professional playerbase – IEM Season XI, IEM Season XII and GSL vs the World. The first 2 were organized by IEM and the latter by AfreecaTV in partnership with Blizzard. These tournaments also award cash prize plus rankings points to the participants.

These events are very hyped by the community because it is the only time of the year (besides the global finals) where we can watch the foreigners play against South Koreans. It usually does not end well for the foreigners, but there is always that little bit of hope going into a competition that maybe we will have a foreigner dominating the scene someday.

This is pretty much all you need to know about the WCS system employed by Blizzard in Starcraft 2. The format was the same for 2016 and 2017, so there should not be much change for next year.

If you are new to the game and its eSports scene, I highly recommend you to stick around for the next competitive season – watching Starcraft 2 is a very fun experience and it will also help you improve your game on the ladder.

Stay tuned for more articles about RTS and eSports in general – we still have plenty of stuff to talk about during this offseason, and we’re only getting started – Thanks for reading and ’til the next article!

Hello everyone! Our favorite competitive RTS has a very exciting year ahead of us, and the focus of this article is to bring you up to date with as much official tournament information and overview as we possibly can! The general structure of the 2018 Startcraft 2 calendar won’t differ much from last year, as […]