I am sure that almost all of us who follow competitive gaming have watched broadcasts of matches in Twitch TV. When you watch those main events, have you ever wondered how many people are inside the same arena? Or how about the amenities that the said place offers. I bet you that at least 80% of the people who follow the competitive scene religiously have not set foot on a proper esports stadium yet.

Let me tell you from experience though as I have watched in The International for Dota 2 that was held in Key Arena way back in 2014 and also the IEM Masters in the famous Oracle Arena for CS:GO back in 2017. The experience is surreal!

To be surrounded by all of those like-minded gamers and also the tech companies who offer their peripherals and contests were the best! On those places, you can also cop your favorite jerseys from your favorite teams so that you can represent and support them!

Now enough of that. I was traveling down memory lane there for a second. Those locations that I have mentioned are not even dedicated esports arenas. For example, Oracle Arena is home to the Golden State Warriors which plays for the NBA. Key Arena in Seattle is somewhat much more smaller but it still hosts NCAA Division 1 basketball in it.

All in all, these are multi-purpose event venues that can cater to esports events. Now, today I will be talking about arenas that are dedicated for esports gaming entirely. So sit back, grab a cup or a can of your favorite beverage and read on. Who knows, in the future, you might be playing in one of these glorious arenas or even watching in one of them. 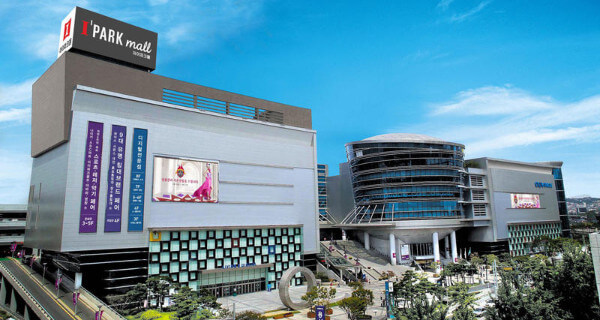 Nothing is much more iconic than the first ever dedicated esports stadium. And guess where that stadium is located at? Of course, it will be located in the country where esports has been accepted and the athletes are treated as superstars, in South Korea. It was built for the sole purpose of hosting various local competitive gaming events in Korea way back in 2005.

This was the glory days of the Starcraft Brood War and Warcraft III Frozen Throne RTS genre. the iPark Mall stadium was the birthplace of players such as Testie, Bizu, Grrr, and many more others. The only bad thing about the iPark Stadium is that it has already closed its doors and has been recently replaced by the new OGN eSports Stadium in Seoul, South Korea. 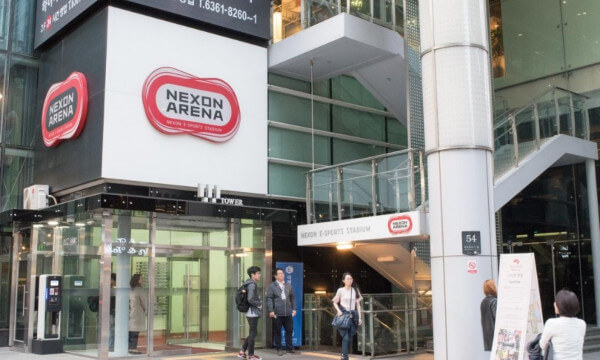 Yet again another venue in Korea. What did I tell you earlier? Electronic sports is well loved by the Koreans and it is even encouraged by parents to send their kids to training camps if they show promise. The Nexon Stadium is one of the newer arenas that are in Seoul right now.

Nexon Stadium has had its fair share of global events that are held in it since its opening way back in 2013. This is the venue for Korea’s Dota 2 League as well as their FIFA and Starcraft II leagues. For the international events, there have been a few WESGs in here and also has been a frequent favorite of Blizzard themselves for their Hearthstone World Tours. 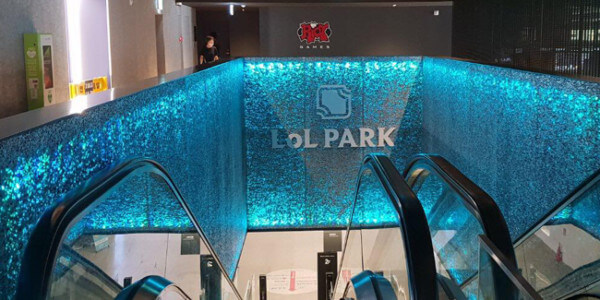 And last but not least, the most recent venue that is located in South Korea. As you all know, League of Legends has deep roots in the competitive scene in South Korea. With major corporations such as telecom companies like Samsung, and SK telecom, TV networks like Afreecam and even teams from the military branch, there will surely be a dedicated venue for South Korea’s biggest esports title, League of Legends.

This is the reason why Riot Games decided to build their venue in Seoul. This venue has its own restaurant inside and features multitudes of sculptures of characters that can be found in the game. There are even computers available for visitors to use if you have the urge to play League of Legends. 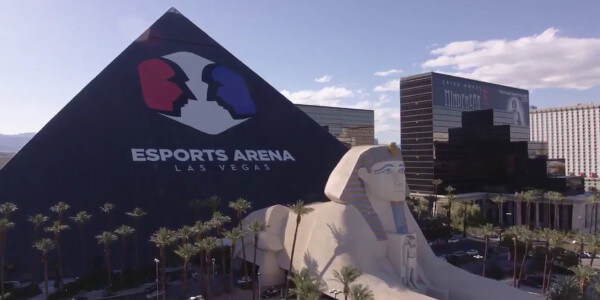 Now we travel halfway across the world to the wonderful desert city of Las Vegas. This ultra-modern esports event center in Las Vegas is inside one of the most iconic landmarks of the land. Yes! The HyperX Arena is located inside the Luxor, which is shaped like the Pyramids of Giza.

This location has had a few events in the past such as MLG events and recently even the Destiny 2 esports event. Aside from that, this is a big venue that has 1,000 screens! Yes, you heard me right! This venue boasts a total of 1,000 monitors where people who watch the events can always catch what is happening inside the screens of their favorite players. 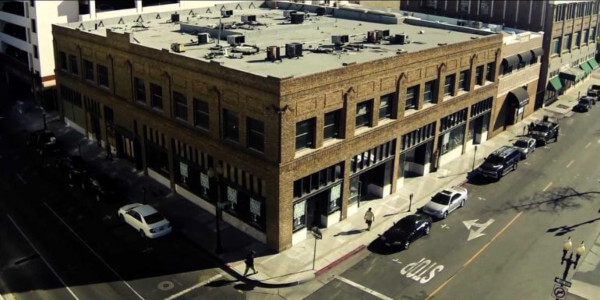 This is by far the smallest location for competitive gaming in the USA, however, this was one of the first ones that were opened back in 2015. This quaint location has its fair share of events such as the Smash Brothers, Fortnite, Call of Duty, League of Legends and various fighting games such as Street Fighter and Mortal Kombat. This 15,000 square foot location mainly caters to the local competitive gaming scene. Competitors who regularly play here live often go off to larger events such as MLG and such. 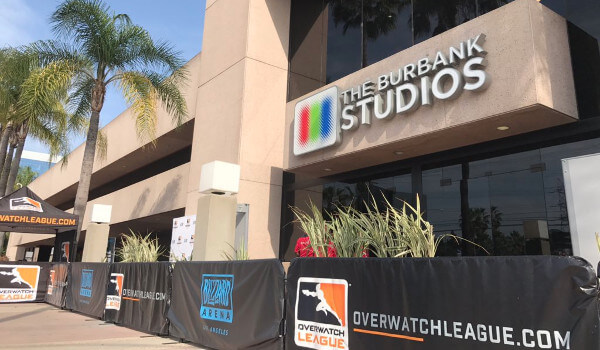 We are still staying in the West Coast of the United States. Blizzard Arena is located right in the heart of Los Angeles, jostled near the famous Warner Brothers Studios and NBC Studios. Of course, if you look at the outer facade of the building, it is reminiscent of the movie studios that you have seen time and time again in a lot of movies and TV shows.

However, don’t let that image fool you as when you enter the arena, you will find that it is actually very modern inside. You will find a multitude of big screens up in the stage area and screens all around the premises so you do not miss the action wherever you are. This arena is home to the multitudes of esports event finals that Blizzard offers, from Overwatch to Heroes of the Storm and even World of Warcraft and Hearthstone. 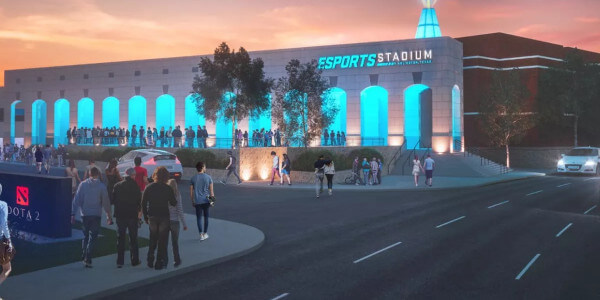 This event venue is one of the newest venues that have been recently built in the United States. And by far this is the biggest gaming event venue that is currently in the USA. Like a famous quote, “Everything is bigger in Texas”. This quote rings true as this venue boasts 175,000 square feet. Imagine the HyperX Arena in Las Vegas, and now multiply it by 6 times the size. That is how big the Arlington Stadium is.

The venue has recently been opened in November 2018 so it is state of the art. It features multitudes of powerful gaming machines, booths, and monitors. The best feature by far is the gigabit ethernet connection that is running throughout the building that will power all of these LAN machines in the future. 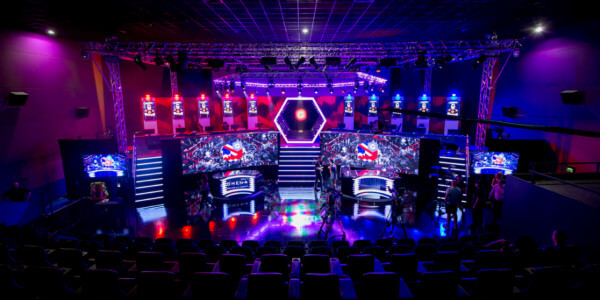 And lastly, the Gfinity Arena all the way in Europe. This location was opened back in 2015 and has seen its fair share of events since then. This is actually the home of the Gfinity Elite Series where they host tournaments for games such as CS:GO, Rocket League, FIFA and Street Fighter V. Aside from that, this is the premier location for the competitive racing scene in the UK, with Microsoft even partnering with them for the Forza tournaments.

Aside from that, they also carry offline tournaments such as Gears of War and Call of Duty. Although this is somewhat smaller than the other locations I mentioned above, Gfinity is actually planning to open a bigger location sometime in the future to be able to accommodate larger tournaments in the future.

These places are currently the ones that are available for the public to visit. However, with the surge of the billion dollar esports industry, sooner or later there will be more venues such as these that will be available in the city near you. As far as I know, there is one being built right now in Denver, Colorado, a few in China and also one being built in Moscow, Russia. Who knows, in a few years from now, there might be an arena close to your city!

Thank you for following us, see u next time! Good luck!

Hello everyone, and welcome to our newest article about Electronic Sports. Today we’re going to discuss a subject that is a bit of a taboo within our society’s standards – the myth that eSports players and fans are all “kids living with their parents” or “underaged people with loads of free time”. If you’re passionate […]

NBA 2K e-League: Everything You Need to Know About it

Have you ever wanted to be a basketball pro? A coach? Would you like to try out for Los Angeles Lakers? Ever wanted to wear the same uniform Michael Jordan won and bring Chicago Bulls a trophy? Now you can! At the days of famous D-League where young players try to show their talents to […]

Top 10 Easiest Esports to Learn and Become Successful in

Have you ever dreamed of walking the path of your esports idols? You know, the professional players that you would see in every big major tournament on Twitch. I am sure that at one point in your life, you wanted to be as good as S1mple, Shroud, Tfue, Pathra, No Tail, the legendary Dendi and […]