Hello, CS GO fans from around the world! Our last premier event of the year is fast approaching, and every single team wants to close out the calendar season sitting at the number one spot. In case you haven’t guessed which event this article will be about, it’s the ECS Season 4 Finals.

Below you’ll find a preview for each team attending the event along with general betting tips (because the first phase of the tournament is a group stage) if you’re looking to do a little gambling while watching the professionals duke it out.

ECS Season 4 is organized by FaceIT and will be held in Cancun, Mexico (the venue is Hard Rock Hotel). The competition starts on December 15th and the grand finals will be played on the 17th. The main sponsors for the series are Alienware (famous gaming computer brand) and Youtube (biggest video streaming service in the world).

Machine will be hosting the desk at the event alongside some great analysts such as n0thing, lurppis and moses. Commentating we’ll have Sadokist and HenryG, among others. With such a talented line up (both in terms of teams attending and personalities hosting and casting), ECS is expected to close out 2017 with a bang.

The first phase of the event is a group stage. The 8 organizations attending will be split into two groups of 4 crews each. They will be played in the GSL style (we’ll explain it below, don’t worry), with initial matches being best of 1, and elimination matches best of 3.

The top 2 from each division advance to the playoffs and the bottom 2 squads are eliminated. The playoffs bracket is all best of 3, including the grand finals.

In case you don’t know what that means, here goes a brief explanation that will get you up to date.


1st series: A vs B (suppose A wins)
2nd series: C vs D (suppose D wins)
After the 2 first series are done, we have our winners match:
3rd series: Winners match – A vs D (suppose A wins)
The winner of this matchup (in our example, roster A) advances to the playoffs in first place of the group. The next matchup is the Losers match.
4th series: Losers match – B vs C (the squads that lost their initial matchups – suppose C wins)
The loser of the 4th series (roster B) is eliminated from the tournament in 4th place (in the group, 7th – 8th place overall in the tournament), and the winner (roster C) goes on to face the loser of the 3rd series in the Elimination Match, the last of the group;
5th (and last) series: Elimination match – D vs C
The winner here will advance to the playoffs in 2nd place and the loser gets knocked out from the tournament in 3rd place (in the group, 5th – 6th place overall in the event).

It might seem complex at first but once you understand this system it gets pretty easy. Most tournaments nowadays have adopted this GSL style, so it’s never a bad thing to take some time to learn how it works.

How teams got in

For this tournament, FaceIT didn’t give out any direct invites – all teams had to earn their spot the hard way, through qualifiers.
FaceIT organized two qualifiers: European and North American. Both had 4 spots to give out. The competition was very fierce as the best 20 crews in the world competed for the 8 invites (10 teams in Europe and 10 in North America). 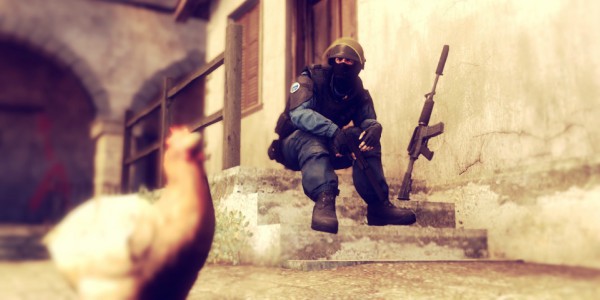 Fnatic’s new lineup with Golden and Lekr0 has been performing very well lately. Despite losing some key players (like olofmeister, considered by many ones of the best players in the world), they have been able to find a very solid roster and have been showcasing very good team coordination and chemistry.

Their unbeaten streak in the qualifiers (they only tied a few Best of 2’s) gives them a lot of confidence walking into this event. It is still too early to label them as the favorites, but they’re certainly building up a lot of hype for what’s to come in their 2018 season.

If you’re looking to gamble, I’d bet that Fnatic advances to the playoffs in the Group A in 1st place. To do this they’d have to win their first two matchups, nothing out of the ordinary for the Swedish squad.

FaZe has a lot of star power in their lineup. With their recent acquisition of olofmeister and Guardian (both previously captained tier 1 organizations), they have been one of the strongest (if not the strongest) squad in the professional scene. Many people wondered if they would mesh well together, and so far they’ve been showing everyone that they are.

FaZe also qualified to the event unbeaten in the European division. They came in second place to Fnatic because they had one more tie in the best of 2 series.

I feel like Group B is a little bit harder than A, but I’d still put FaZe as one of the favorites to advance to the round of 4 – so I’d advise taking this tip into consideration if you’re going to bet.

Mousesports is a legendary German organization that wasn’t doing very well in the CS GO scene for quite a while – This seems to have changed, however. Their current roster won the ESG Tour Mykonos 2017 (a premier tournament) just a couple months ago, beating Team Liquid 3v2 in the grand finals.

Look out for ropz, a player with only 17 years of age and already showing many signs of being one of the future’s best.
They will have a difficult time advancing to the playoff bracket, but for them grabbing the second place wouldn’t be that big of an upset – it’ll all depend on how they perform on that given day.

The Denmark organization has had an incredible 2017. So far they have won 2 premier tournaments (IEM XI World Championship and ELEAGUE Major Atlanta) and collected plenty of top 4 finishes, showing a very consistent (and still increasing) level of play.

They will face a big problem in this upcoming even though, and that is because dev1ce, one of their best players is still out on medical leave. This means Astralis will have to play with a stand in, which will be RUBINO from Team Dignitas. Not to take anything away from RUBINO (he wouldn’t have gotten chosen by Astralis if he wasn’t very good), but the team chemistry and coordination will probably take a big hit without dev1ce playing.

I predict Astralis will go out in 3rd place in their groups because of this problem they’ll have to overcome.

The all American roster managed to qualify in 1st place, beating powerhouse crews like Team Liquid and SK Gaming 2-0 on their way to the top.

They come with high morale and maxed out confidence from their last 2 major trophy wins in the last couple of months (Dreamhack Denver and iBUYPOWER Masters).

Their group is very tough, so it’ll be a hard task for Cloud9 to advance. If I were to bet, I’d probably say they’re going to get eliminated, but their matches will probably be very even and competitive, which means anything can end up happening.

OpTic has been a pretty consistent team the past few months, showing some decent results. The downside of this is that they haven’t managed to make any deep runs in premier tournaments – they usually falter in the top 8 or top 6.

With the legends friberg and allu, the organization is trying to end their year on a high note, and being placed in group A (arguably a little bit weaker), they have a good chance of getting through to the semis.

Team Liquid has been very on and off during the year. At times, they seem to be on par with the best teams in the world, and some other times they look completely outclassed against the same squads.

They have recently added steel to their lineup (he joined last month), so their skill level with this roster is yet to be seen by the audience. I don’t have high expectations for them in the event for this reason, but they could be building towards a better 2018, already starting earlier than other organizations.

Luminosity did a great job qualifying for this event. They narrowly beat SK Gaming to the 4th spot – they had the same match results but Luminosity had a better round win rate.

The Brazilian squad has been showing great signs of improvement in the last couple of months, earning spots for premier and major tournaments that they didn’t use to in the recent past.

Some people are predicting them to pull off a top 4 result in the upcoming ECS, but I think they still have little ways to go before they can go toe to toe with the best teams in the world consistently.

Thanks for joining us in this article and don’t forget to tune in to Twitch.TV to watch the best players fighting it out for the last premier trophy of the year. See ya soon!

The major is over and the Dreamhack Las Vegas tournament is around the corner. But what happens after that? The ESL Pro League is there to keep you full of Counter Strike Action. This big tourney has a million dollar prize pool. It’s main calling card, however, is the sheer volume of matches. It has […]

There has been a slight break from major tournament action lately in the Counter Strike scene. The next major tournament scheduled is Starladder, which will start in early April. Until then, the ESL pro league provides satisfactory matchups every week on Tuesday, Wednesday, and Thursday. The North American league is full of superpowers like SK, […]