Well met! Today we are going to be building a Tier 2 deck. This is going to be the first Mid Range archetype that we are building. Hearthstone Mid range decks offer the best of both worlds, a slice of Aggro and also a slice of Control. It is, after all, a different beast altogether. If you happen to catch the greeting, then you already know we will be building the Mid Range Paladin, or more commonly known as the Murlocadin.

Most Paladin decks are somewhat built with Control in mind since the class has some of the best Legendary taunts as class cards. Throw in a couple of early game Murlocs and you have everything covered, from start to finish. The early game Murlocs will serve as your core cards as they have an unbelievable synergy with each other and get stronger when comboed with each other. Without further delay, let’s get started on building this list. 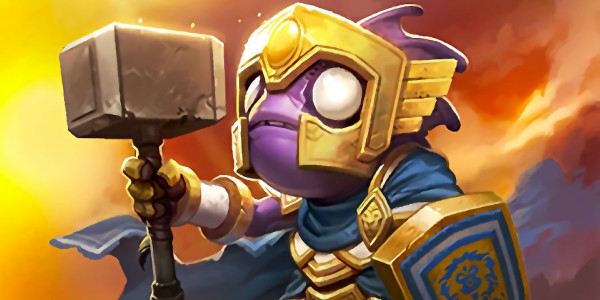 As with any other Hearthstone deck building guides, I have written, we are first going to calculate the cost of creating from scratch. This is by far the second most expensive lists that we have covered. This comes in at 10,660 Arcane Dust but completing the Karazhan adventure is not required. This list covers the majority of cards from the Ungoro and Frozen Throne sets but it has some Classics and Old Gods on it too.

There will be 4 Legendaries needed and they are all part of the core cards. These are Tyrion Fordring, Sunkeeper Tarim, Wickerflame Burnbristle and Finja the Flying Star. You should craft all of these as the first three are the three class Legendaries I was talking about earlier and they all have Taunt. These will save you all throughout the game as they will provide your main line of defense. Finja will be your activator since it has the ability to draw out the Murlocs from your deck and place them directly into play.

The Epics needed will be eight in total. There will be two copies of Vilefin Inquisitor from the Old Gods, Murloc Warleader from the Classic set, Gentle Megasaur from Ungoro and Corpsetaker from Frozen Throne. Vilefin will be very crucial early game as he will change your hero power to be able to summon a 1/1 Silver Hand Murloc instead of a 1/1 Silver Hand Knight. This will grant you an endless supply of them critters as long as you have mana to play your hero power.

Warleader, which was hit by the recent nerf is still a strong card. It will grant all your Murlocs on the board +2 attack. Gentle Megasaur is another card with synergies to the Murloc Tribe. It will evolve all your Murlocs on the board with any skill of your choosing. Lastly, Corpsetaker will gain abilities from any other cards you have in your deck. You would be able to get Taunt and Divine Shield from Tyrion, Lifesteal from Burnbristle, Stealth from Finja and Windfury from Stormwatcher. Now that is what I call an OP card.

There are 6 Rares that you will need. It will be two copies of Murloc Tidecaller, Rallying Blade and Spikeridge Steed. Tidecaller is an early game card which will buff your other characters from the same tribe with +1 attack. If you are guessing it’s buffing Murlocs, then you are correct. Rallying Blade will be one of your main weapons for minion removal and it will also buff any of your creatures with Divine Shield if the shield is still active. Spikeridge Steed will turn any minion into one with Taunt and adds value afterward when it dies.

The Commons will be two copies of Righteous Protector, Hydrologist, Rockpool Hunter, Bonemare and Stormwatcher. The only Basic cards that are included in this list is a pair of Blessing of Kings. Righteous Protector will be your early game defense as it is durable due to Divine Shield and Taunt. Hydrologist will create value in your hand as you will be able to pick a secret from the list it gives. Rockpool Hunter will buff them critters too and Bonemare works like Spikeridged Steed, only with a minion that comes with it. Stormwatcher will be your finisher if comboed properly with Blessing of Kings as it will hit for 16 damage due to its Windfury ability.

How to play with this Paladin deck?

Now, it is very easy to play and win with this pack. All you need to remember is play with your strengths. This list has a lot of Murloc synergy between them and the other non Murloc cards either has taunt to protect those little critters of yours or have buffs that make them stronger. Always keep Vilefin in your opening hand as an early Vilefin will be hard to remove, and also change your hero power to give you an unlimited Fish people. Make sure you widen your board with the low cost minions, while also protecting them with cards like Burnbristle, Spikeridge Steed and Righteous Protector.

You can summon your other fish people from your deck for free if Finja is already on your board. Just make sure that Finja gets to deal the killing blow as its ability is to draw out your deck. If your opponent also has a wide board, Tarim will be the deal breaker as it turns everything to 3/3 except him. It evens out the playing field with Tarim towering above them all. Your opponent would have to use at least 3 of those 3/3 minions to remove Tarim while your own 3/3 are protected.

Stormwatcher and Tyrion will be your finishers if it ever goes to a longer game. You would have no problems finishing games due to Blessing of Kings which gives any minion +4/+4 and you also have buffs from Bonemare. Put a Blessing of Kings on Tyrion and it becomes a 10/10 Taunt with Divine Shield, which is very hard to remove from the board. If ever your opponent gets to kill Tyrion, do not worry. He will give you a nice and shiny weapon called the Ashbringer and you can use that to whack your opponent’s face for style points. Oh, and that Ashbringer hurts like hell too as it is a 5/3 weapon.

All else aside, you should be able to finish out games quickly around turn 7 or 8. Your Murloc synergy, coupled with buff cards make it a formidable lineup if you can keep your board alive. The trick is using your Rallying Blade to kill minions instead of trading it with your critters. Board supremacy is your key because if you have 3 or 4 Murlocs and you drop a Warleader on it, those critters magically hit for more damage because of the Warleader buff.

Use your health as a resource, just like when you are playing with Rogue. Do not be scared to get damaged since Burnbristle and Corpsetaker will heal you back up if you manage to get the Lifesteal buff. For Gentle Megasaur buffs, choose the Evolve buff according to the situations. If you can finish the game if you get either the Windfury or the +3 attack buff, go for it.

Just keep playing this Hearthstone Paladin deck and you will get better when reading situations. It is not a complicated build, and it is also loads of fun to play with.

Good luck and You will Command the Light!