Hello! Karmakeddon here again and today, we will be building yet another Hearthstone beginner friendly budget deck. With all that nerfing fiasco Blizzard is releasing with the coming patch, it is always nice to see something that is not affected by those changes. This will be another aggro deck as playing aggressively early on in the game gives you an edge towards your opponents who need to build up the board first before starting to work.

This pack has it all. It has direct spell damage to the face, minion removal, card draw and minion buffs. I am talking about the Secret Mage deck. It utilizes secrets and secret drawing cards so that you can play the secrets for free. These spells have various uses like countering your opponent’s strikes or stealing spells and minions from them. It has perfect synergy with all the cards in this list and there are multiple of ways on how to execute whatever is on your mind.

This was a Tier 1 pack back in the last expansion and today, we will be building a somewhat cheaper version of it. Even with a stripped down version of this, I still managed to win 17 straight games starting from Rank 15 with no stars then ended in Rank 8 with 2 stars. 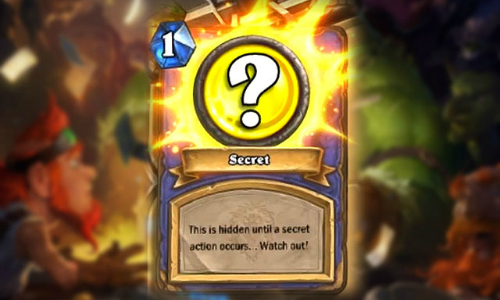 Starting off, to be able to build this deck, you need to have at least a minimum of 1,160 dust with the maximum of 1,220. If you have some cards on this list, even better as this reduces the cost of crafting. If you have none of the cards and will be starting from scratch, you will be needing to craft 14 Commons and 6 Rares if you only have 1,160. It will be 13 Commons and 7 Rares if you have 1,220. The other cards will be basic ones and the last two will be rewards for playing the prologue of the adventure One Night in Karazhan, which is free.

First, you need to craft the Commons which will be 40 dust each. You need to craft 2 copies each of Kabal Lackey, Mana Wyrm, Arcanologist, Cold Wraith, Sorcerer’s Apprentice, Cryomancer and 1 copy of Frozen Clone. Next, you will be crafting the Rares which cost 100 each. These are 2 Kabal Crystal Runners, 2 Kirin Tor Mages, 2 Counter Spells and 1 Mana Bind. If you have only 1,160 dust, you can substitute the Bind and craft another Frozen Clone instead.

The Firelands Portal, which is a removal / burn incantation, is the free reward that you can get from Karazhan. Completing this list will be basics like Frost Bolt, Fireball, Water Elemental and Arcane Intellect. These cards are totally free and if you get your Mage to Level 10, you would have all of these in your collection.

I tested this Secret Mage list and got 17 straight wins on a Ranked play on the Americas server: 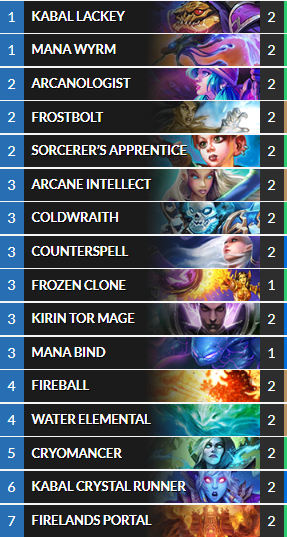 That was the easy part, the hard part is playing the deck for the first time. There is a lot of synergy in this particular pack and can be utilized to the greatest extent. Always keep Mana Wyrm in your hand in the beginning and if you have a Secret and a Kabal Lackey keep these too. Summon the Mana Wyrm first though as these go up in attack every time you use a spell. Use the Arcanologist to draw the Secrets you have in the deck for free then summon minions like Kabal Lackey or Kirin Tor Mage to cast those said spells for free as well.

Casting those Secrets buff up your Mana Wyrm thus making it stronger, and also reduces the cost of summoning Kabal Crystal Runner by 2 which is very nice as you can summon them earlier. Other combo cards include attacking with the Elemental first to freeze a target then casting Cryomancer as it gives it +2/+2 if a target is frozen when it enters play. You can also summon Cold Wraith when a target is frozen for a free draw.

Your Secret spell is a Counter incantation, which directly counters a single strike your opponent casts. Mana Bind is used to steal a spell your opponent uses and then you can use it for free and Frozen Clone which steals creates a two copies of a minion your opponent summons. Other spells include direct damage ones like Frost Bolt, Fireball and Firelands Portal which can be used to finish an opponent or a minion.

Use Intellect for drawing your deck. Summon Sorcerer’s Apprentice before casting spells since it has synergies with incantation casting as it reduces all of their cost by 1. Firelands Portal is also a nice incantation since it places a 5 drop minion on your board while dealing 5 damage to face or other targets. With enough games in your belt, you would even learn how to keep burn spells in your hand and unleash a single turn knockout combo with attacking minions and blasting their face if you manage your mana right.

At first, it will be a little bit hard but as you go along the way, you will learn how to initiate combos really well and from there, you can start to decimate your opponents and quickly dispatch them. If you manage to master playing this, you would be very hard to stop and you will easily see yourself climbing up the ladder ranks really fast. You can even switch being an aggressive archetype to a Control Burn Mage as you have some of the core components of that particular list as well.

When you build up enough gold reserves, you can swap out the Kabal Lackey for Primordial Glyphs, the Cold Wraiths for Medivh’s Valet and add Legendaries like Archmage Antonidas so that you can create more burn spells. Keep playing and keep experimenting as this will definitely enhance your decision making and also your playmaking skills whenever you face situations.

Once again, this is Karmakeddon, signing off!