Deck building for Hearthstone is very exciting and very frustrating at the same time. It mainly depends on your playstyle. This affects the class choice you want in building a deck since some heroes synergize well with specific sets of cards which play along with their hero power. Another thing that affects building is what mode you are going to be playing in. If you will be playing in Standard mode, you can only use the Classic, Gadgetzan, Ungoro, Lich King expansion sets and the Karazhan Adventure card set.

This makes it a more competitive style of deck building since you have a small pool of cards to choose from and this is the mode that is used mostly at Hearthstone tournaments. If you are playing in Wild Mode, all cards from all the other previous sets can be used with no restrictions.

Each class has a capability to be built in one of these three ways. Basically, there are three ways you can build it to serve a purpose. The first is the Aggro decks. This involves being overly aggressive and you tend to attack the “face”, which is the class your opponents choose. When playing Aggro, you tend to finish the match before Turn 10 thus making it a super fast deck but you would need to pull the right cards in the opening hand.

The other end of the spectrum has the Control decks. This involves in manipulating and minimizing the movements of your opponent and tend to go slowly. You want to prolong the game until you have all the right cards and deliver a single knockout punch. Playing this takes some kind of skill and finesse as you need to calculate thoroughly.

The third type that exists is the middle ground of the Aggro and Control, which is the Mid Range deck. Mid Range offers versatility in dealing with situations, but you would have fewer tools compared to the other two specialized types since you have something from each of them.

Now, with having the idea of the basic Hearthstone deck types that you will encounter in the game, I will be discussing each class, what their hero power does and also talk about on how to build them to suit your playstyle as they can be built in one or three ways. 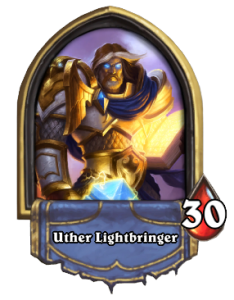 The Paladin’s innate hero power summons a 1/1 Silver Hand Recruit which places a single minion on your board. With Vilefin Inquisitor phasing out, the Murlocadin deck has been severely weakened, thus making the aggro and mid range type of decks for the Paladin underpowered.

Pallies are one of the best classes to be played in the Control archetype as they have three of the best class Legendaries which are also awesome defensive cards. The first is Wickerflame Burnbristle which makes you gain HP depending on how much Burnbristle damages any opponent. He also comes with Taunt ability, which forces you to attack him before you can attack other minions or the face. It also comes with Divine Shield, an ability where it is immune to the first damage inflicted on it.

The second Legendary, Sunkeeper Tarim is a combo to the hero power the Pally has. Whenever you drop Tarim, all the minions on board are converted to a 3/3 version. This evens out the playing field if your opponent has large minions as they get dropped down to 3/3 and also buffing your 1/1 tokens from the hero power to a 3/3. Aside from its Battlecry, it also has Taunt.

The last awesome Legendary that the Paladin has is probably the best card in the game. Tirion Fordring is another Taunt minion that also comes with Divine Shield. Upon death, you will equip a weapon, the 5/3 Ashbringer on your hero so that you can use him to directly attack any targets. 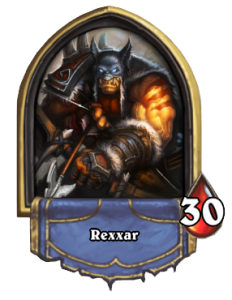 The Hunter’s power is directly damaging your opponent’s face for 2 hp and cannot be blocked by any minion. This makes the Hunter an excellent class for using Aggro since most of its cards are very low cost and synergizes well with each other. You can build it using the full Beast package to buff the Scavenging Hyena. The Hyena receives +2/+1 on it every time a Beast dies so it is quite easy to make it into a monster by using low-cost Beasts and the card Unleash the Hounds, which gives you 1/1 Beast tokens for every minion your opponent has on their board. 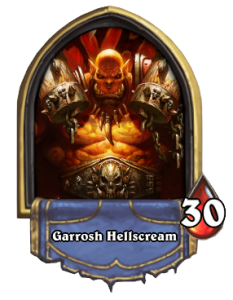 The Warrior’s power adds 2 armor to yourself. This makes you harder and longer to kill since your opponents have to go through the armor first before damaging your HP. This makes it a good combo for the Control archetype since you will be building a wall against attacks with Taunt minions and also raising your armor up using Alley Armorsmith.

Warriors do have one of the best Hearthstone Aggro decks as well. Playing Pirate Warrior ensures that you have a very fast match, sometimes less than 7 turns. Now, most of the Pirate pack is coming from the Classic set and can be used by other classes. What sets Pirate Warrior superior against them are the Warrior specific Pirates and weapons. Pirates like N’Zoth First Mate provides you a Rusty Hook in turn 1 which is a 1/3 weapon, Bloodsail Cultist and Upgrade buffs weapons with +1/+1. Then you have the weapons like Fiery War Axe, a 3/2 weapon and Arcanite Reaper which is 5/2. 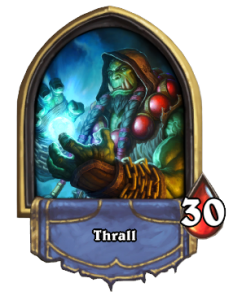 The Shaman’s ability fills your board with Totems, which has its own specific abilities as well. There is a Taunt, Healing, Spell Power and an attacking Totem that has 1/1. It can be combined with the Token Shaman build where you fill and buff your board with small and low-cost cards like Fire Fly. If you have a plethora of minions and totems, you can use Bloodlust by turn 5 temporarily giving your minions +3 attack. It can provide a world of hurt for your opponent, and sometimes killing them in a single turn since using Bloodlust on a full board is 21 damage.

Shamans do have a Control archetype but it has two variations. You can opt to go with the Jade Lotus package which is very strong with all the Jade Lotus synergies that the Shaman has or go with the Elemental package which the Shaman has a lot of too. If you know how to synergize well, you can actually combine the two and build a Jade/Elemental version like what I have. 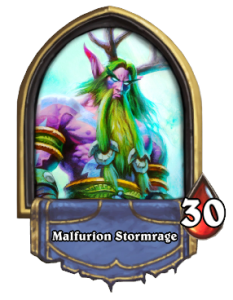 The Druid is a tree hugger and his ability gives you +1 attack like a weapon temporarily and +1 armor as well. The Token Druid is the same as the Shaman’s but instead of the hero ability to provide tokens, you will be using Living Mana instead which gives you a 2/2 minion for each mana you have. Combine that with a multitude of the Druid’s buff spells like Savage Roar, Mark of Y’Sarj or Mark of the Lotus and it is lights out for your opponent.

The Control archetype for the Druid is one of the most common Control Hearthstone decks out there. You will most likely be running the Jade Druid which ramps up your Jade tokens by using Jade Idol and the plethora of Jade cards that create a Jade token. Each time a token is cast, the next one becomes stronger by giving it +1/+1. With the Jade Idol, you can loop cast it to your heart’s content since you have an option to reshuffle the card or summon a token. If you have Fandral Staghelm though, you can actually cast the token while also reshuffling the card to your deck thus giving you unlimited cards to play with. 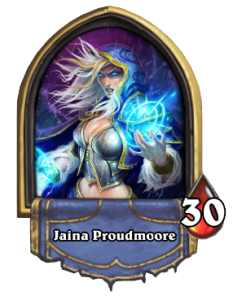 The Mage’s ability gives you an option to choose a target dealing 1 damage to it. You can use it to get rid of minions with 1 health or deal it directly to the face. The Secret Mage is the Aggro archetype of the Mage. It utilizes the Mage’s secret spells where you can either counter your opponent’s spells, make a copy of the minion they summon, polymorph their minions to 1 HP, provide you a free spell or even ultimately save your HP by mitigating damage.

If you want to go full Control, however, Mage is up there with the Paladin on the Control archetypes. You can either go the route of the Freeze Mage, where you deliver the knockout blow after dropping Alexstrasza a turn before blasting your opponent with Frostbolt and Fireballs. If you are a fan of theatrics, however, you can go on the route of the Exodia Mage, where you rain Fireballs on your opponents face and wipe them off the Earth. Both of these decks utilizes Blizzard and Frost Nova to freeze your opponent’s minions. 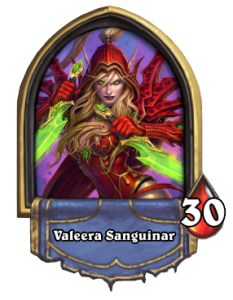 The Rogue equips a 1/2 weapon as its hero ability. Quest Rogue before the nerf was one of the fastest and most annoying Aggro decks which can end the game by turn 5. It plays around the card called Caverns below us which gives turns all minions you own 5/5 but still retains its casting cost.

The Miracle Rogue requires a very high skill cap to play and one of the most expensive to build. However, if you master all its intricate nuances, you would be able to turn almost a losing game into a winning one by dropping a 20/20 Edwin Van Cleef and two Arcane Giants while buffing your Questing Adventurer on the board. 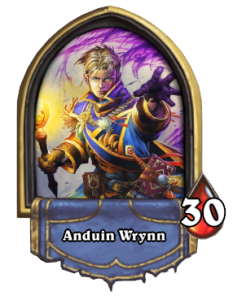 The Priest, like its namesake, has the ability to target heal anything on the board, even your opponent’s face if you wish to. If you want to play fast using Priests, go for the Silence Priest build. Although it is strong, it is too gimmicky and can be countered easily by other Aggro decks by outdamaging them quick enough.

If you want to prolong the game however and outlast your opponent, then Priest is the perfect class to play. You can go on the route of the Miracle Priest using Lyra the Sunshard and just out heal and outcast whoever you are playing against. Or play the Dragon Priest archetype, which directly clears your opponent’s board using Dragonfire Potion while protecting your own board since it does not damage Dragons.

Warlocks have the best hero power available in the game with the card draw. With that said, however, they are also the class that is very under powered and the most boring to play. Lakkari Sacrifice is not good enough compared to other control type decks and although Zoo Warlock is good Aggro deck, it is considered as a one trick pony which is very easy to play around against. 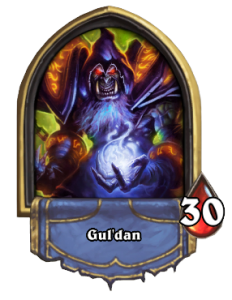 Hello! Karmakeddon here again and today, we will be building yet another Hearthstone beginner friendly budget deck. With all that nerfing fiasco Blizzard is releasing with the coming patch, it is always nice to see something that is not affected by those changes. This will be another aggro deck as playing aggressively early on in […]

Heh, greetings!! Today, we will be embarking on a new Hearthstone deck building adventure. We have already completed building the Tier 1 deck lists for this new meta game. These were the Highlander Priest, the Jade Druid, the Tempo Rogue, the Token Shaman and the Mid Range Hunter. We covered the full builds for the […]