Good news Dota 2 fans!! The Season 5 of DPL or the Dota Professional League will be concluding the quarterfinals on April 20th to the 22nd. It will feature eight of the best Chinese teams that are currently playing on the professional scene.

It has a very big prize pool of 1,000,000 Chinese Yuan, which a third of the pool will go to the first place winner. Aside from the prize, the top 3 squads will also earn a berth for the upcoming MDL Changsa Major in Macau, which is a Valve event.

They will be joining teams such as Mineski, who won the recent Dota 2 Asian Championships 2018, Team Secret, OG, Vega Squadron and VGJ.Storm. Newbee and Vici Gaming already has a direct invite to MDL Changsa so if any of them gets a place on the top 3, the next team below them will get the qualification berth. The playoff round will be a Best of 3 Single Elimination bracket with the Grand finals being played on Best of 5.

Invictus Gaming and iG Vitality will start at pole positions waiting at the semi-finals for topping their groups during the group stages. Invictus Gaming is composed of Agresif, Xxs, Srf, BoBoKa, and Q. The core of this team have been playing together since 2016 with the new additions Srf and Agressif joining recently.

iG Vitality, on the other hand, has been running a pretty solid crew since 2016 with Sakata, InJuly, dogf1ghts and super. The only new addition to them is the Singaporean carry Meracle, who will play position 1 and just joined a month ago.

Waiting at the quarterfinals slots will be another Chinese powerhouse squad, Newbee. They are composed of Moogy, Sccc, kpii, Kaka and their captain, Faith. As I said before, they are a powerhouse with a long history of playing together. This is the roster that won the recent ESL One beating Team Liquid 3 to 2. Joining them at the other quarterfinal slot will be Keen Gaming, which is a newer face on the scene but has old names such as MS and Yoona.

The four remaining squads will be duking it out in the Round of 8 and only two will be advancing to the quarterfinals where Newbee and Keen Gaming are waiting. Newbee will play against the winner of the matches between the two LGD teams. LGD Gaming and LGD.Forever Young will be playing against each other to see who advances on the first quarter-final slot. The second slot will be a battle between Vici Gaming and VGJ.Thunder.

So far, the Round of 8 will be providing us with a star-studded entertainment on the first day. We will be seeing which LGD force is better on the first matchup. This will be a battle of bragging rights as both of these LGD rosters will try to prove as who is the better team in the organization. It will be between Fy‘s squad with LGD and Yao‘s LFY squad.

I think LGD would come out on top of this match as we will not be seeing DDC play for LFY as he is currently away on loan to VGJ.Thunder. Also, LFY’s roster has been somewhat erratic these past few months with Ohaiyo leaving and InFlame riddled with health problems. They are pretty much the same team as their TI7 lineup however with Yao replacing DDC as captain.

The second Round of 8 is a different story. The match between VGJ.Thunder and Vici Gaming will be an all-out war which might go the distance. I still think Vici taking this game however as they have experienced veterans in their lineup such as Old eLeVeN, LaNm, Paparazzi and Fenrir. These guys have been playing together for a long time as they were from the legendary team EHOME and this will be a big factor in the upcoming matchup.

I would not even be surprised if they steamroll their quarter-final opponent Keen Gaming and secure a spot on the second semi-final match against iG Vitality. VGJ.Thunder, on the other hand, has a newer lineup in Sylar, Freeze, Yang, Fade, and DDC. Although they are a new lineup, they might provide a good matchup against VG as DDC is a very good support player. 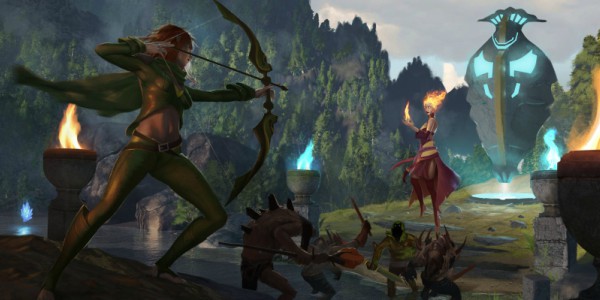 The lineups that are currently waiting in the quarter and semi-finals looks pretty solid, except that of Keen. I am pretty confident that they would be having a hard time against solid squads such as VGJ.Thunder and Vici Gaming.

Like I said previously, these two rosters in the Round of 8 has a potential of steamrolling Keen Gaming as they just do not have a lot of tournament experience in their roster. And even if by some miracle they are able to win and advance to the semifinals, they will never stand a chance against iG Vitality.

The Finals match is still not set in stone as there are a lot of squads that have the potential to create an upset. I will, however, make a prediction on the squads that will most likely make the top four matches on the last day. I am gunning for a matchup between VG and Newbee in the Finals match. These two squads just have the pedigree to make it all the way, with Newbee keeping it’s TI7 squad and Vici with the way they are currently playing right now.

VG had a very scary run during the recent DAC, obliterating quality opponents such as Secret and TNC Pro. They only succumbed to the eventual winners Mineski in the upper brackets and the eventual 3rd place winners Virtus Pro in the lower brackets.

Another team I would like to see succeed is LGD. They were the second place winners in the recently concluded Dota 2 Asian Championships, losing twice to Mineski. By the sheer way they play against top-tier opponents right now, they have the biggest chance to get to the finals and win the overall tournament.

And unlike Newbee and VG, they do not currently have a direct invite to the next Majors, the MDL Changsa. So they really need to win this tournament and get into the Valve sponsored Majors to be able to compete for pro circuit points for another TI invite. And besides that, I just want to see Fy God on top of the world again just like before when he played with iceiceice and VG.

Thanks for reading our tips, see you next time! Good luck!

With the culmination of the most recent Minors in Ukraine, which is the StarLadder Minor, the stage is now set for the next Valve sponsored Major. This will be the 4th Valve Major that will be held this year. This also closes out the DPC season, and after that, all we will be looking forward […]

What’s crackin guys! There is some excellent news on the horizon for a lot of Dota 2 fans all around the world. The first big Dota 2 tournament just after the aftermath of the TI shuffle is upon us. There are a lot of organizations that have replaced their players (will be talking about the […]

What’s up all of you Dota 2 fans! I bring good tidings to all of you who are aficionados of the Dota 2 competitive scene. Today, I present to you the first Major tournament for the calendar year of 2018 – 2019 season. This will also be the first big tournament after the recent conclusion […]