Dota 2 is Valve’s extremely popular MOBA game that has been around for years. It has a huge professional e-sport scene and many avid followers. It started as a mod for Warcraft III, Defence of the Ancients. Much like Counter-Strike which was also a Half-Life mod, Valve soon developed a stand alone game based off the mod. Dota has remained as the “second” for many years, even though lots of updates that Valve implements are so drastic that the community feels as it should be at Dota 5 by now.

Another major update by Valve took place in December 2016, Dota 2 Patch 7.00. This was an extremely important update with many different patches that radically changes the whole game. It also signifies the end of the patches starting with 6, which were used for the past decade. This might be the tip of the iceberg to a complete shakeup of Dota 2, so let’s review what exactly Patch 7.00 implemented.

The first thing we have to discuss is the addition of a new character, which is the first to be exclusive to Dota 2. He has some insane abilities and is just one of the many major changes in the new update. First of all, he can climb trees which is insane when you think about it. He can also summon a huge army of monkeys, and has the ability disguise himself as a freaking banana! If that’s not a cool ability, I don’t know what it is.

With eighteen strength, twenty two agility, and twenty intelligence, he is an incredibly balanced hero. He has the option to jump off trees and attack other enemies and disguise himself as trees and bananas. This new addition to Dota 2 is a huge feature that is sure to add a new intrigue to matches!

The next change we have to take about is the new ability tree. A system a lot like Heroes of the Storm, you can choose different abilities at levels ten, fifteen, twenty, and twenty-five. These abilities eventually start to look like the branches of a tree, thus the name ability tree. This change is a major shakeup because now players have to re-evaluate every single character and rediscover the best ones.

Heroes that once had the upperhand over another might now be dwarfed with the new ability tree. In addition to this, characters can now have different abilities each game, leaving opponents to have to plan ahead for every possible outcome. This new update alone can lead to a major change in the pro scene, as only the smartest will be able to adapt. Be on the lookout for how this feature will change up the scene.

The third change we should discuss is the addition of the backpack! In addition to the six item slots in the active item slot, you can now carry along three additional items in your pouch. You must swap these items into your active item slots to use them, but you can still use them to craft other items if they are in your backpack. The items in your pouch will remain inactive for six seconds after you move them out, but after that any abilities they have will be working.

The backpack is another change that will make the game more complicated and harder to understand. This will be a big favorite for professionals, as they always complained that Dota was sometimes a little too simple as to not provide separation between the best pros and just the good ones. The pouch combined with the ability tree will place a premium on strategy in professional matches, and while it might be confusing for newer or less talented players, it will eventually become an accepted and exciting feature of the game!

HUD, is the next thing we have to discuss. The developers somehow found a way to provide more information on the screen, and show more of the actual game! The new HUD has cool and exciting features such as a quick access mini map and a teammate display, which displays info such as their health and mana. They also made leveling up your hero a lot easier, so you can do it even in the middle of a raging fight.

Also, the mana cost associated with using an item is now displayed next to the item. The bar on the top of the screen that usually shows your score and the game time is also now made smaller along with your personal HUD bar, to make any intrusions to the gameplay minimal. This new HUD is a great feature for Dota 2 Patch 7.00 and is an awesome thing to try out the next time you log in. 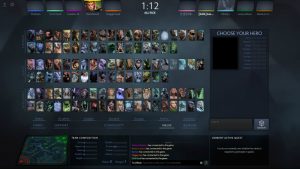 The developers also added a new pregame. It consists of the pick phase and the strategy phase. You can pick your characters and strategize with your teammates while your map is prepared in the background. This is super convenient and eliminates the annoying and long load up screen that all of us hate. They kept the same filters while looking for heroes, and show each hero’s stats when you select it.

Also, you can now recommend characters to your teammates by right-clicking the desired hero and forwarding it to your teammate. Your teammate will get a notification that you recommended that hero to him, and the character will be highlighted for him. Once everyone gets their heroes, you will get thirty seconds of guaranteed planning time where you and your team can discuss strategies. You can now also buy your items before you spawn in, putting an end to the frantic scramble to buy items and get map control before the other team. All in all, these new pregame features are super cool and helpful for Dota’s future!

Many major map changes were made, some so extensive that people who played hundreds of hours on them had trouble navigating. Also, the levels at which you unlock your ultimate is changed to one new one on levels six, twelve, and eighteen. Because of the new ability tree, ultimates might not be as integral to the game as before but will remain an important part.

Heroes also no longer have the attribute bonus ability, which was a huge benefit to many characters. Experience required to reach levels was slightly decreased. The same amount of experience that would have got you 11 levels before the update now gets you twelve, and the experience required for level twenty three preupdate now gets you to level twenty five. Maybe this is to balance out the gold drop buff from a nine point nine multiplier to a eight multiplier.

Death cost has been totally reworked as well. Previously, the death cost was your heroes level multiplied by thirty. Now, it is a more complicated formula that has nothing to do with your level. The new cost is your net worth divided by fifty plus one hundred. This can make dying a lot cheaper if you are struggling, but quite expensive if you are doing well.

Another exciting feature that deserves a mention are the new community created bots. Dota 2 enthusiasts can now create their own bots using an ingame formula and API. Downloading and or making tougher bots will drastically improve practice, and is a much needed feature that Valve was smart to add. Some of the less nicer looking characters were also remodeled to be more aesthetically pleasing as well, which is a nice touch. The Roshan is also moved up river in this new patch.

Thanks for reading this article about the exciting 7.00 patch in Dota 2 and sticking around till the end. This update added tons of new features and you will definitely like it. I hope this article was able to educate you on the different features caused by this patch.

Be on the lookout for future articles, see you next time! Good luck!

If you guys follow the Counter Strike articles on this site, you are probably aware of the new weekly news series I started. Because Dota 2 is such a big esport as well, I have decided to do the same thing for this game! In this weekly series, I will go over the latest news […]

Hello everyone, and welcome to another weekly Dota 2 article. As always, we will explore the latest news and developments that the week has to offer, so you can keep up to date with all the information being released in the professional scene! Your time is valuable, so without further ado, let’s get started.   […]

It is time for another installment of our Dota 2 weekly series! There has been a lot of exciting news in the scene, and there is much to discuss with the Kiev major already underway. In this article, we will be going over some results from the early stages on Kiev, as well as other […]